Christopher Paolini recently showcased his art skills in several drawings included in the Deluxe Edition of Inheritance, which released in North America at the end of October. The author, who is on currently traveling through Italy following a brief promotional tour to promote the Deluxe Edition, took to Twitter to share his latest sketch – a depiction of the final scene in the Inheritance cycle.

Christopher had this to say of his drawing: “Did a little sketch in my journal today. From Inheritance of course. […] I do drawings in my journal every now and then to mark major events. Been waiting to do one to mark the end of the series.” 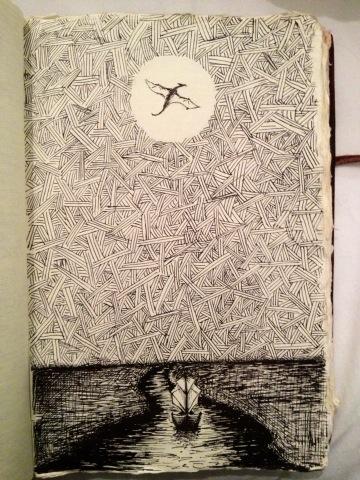 And the ship sailed onward, gliding serenely down the moonlit river toward the dark lands beyond.

What do you think of Christopher’s portrayal of this iconic Inheritance scene?