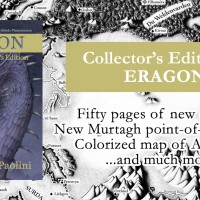 Barnes & Noble has announced the upcoming release of an Exclusive Collector's Edition of Eragon! The book will feature nearly fifty pages of new content, includes scenes from Murtagh's point of view, a colorized map of Alagaësia, in-progress illustrations, hand-written pages, and much more!
Read More 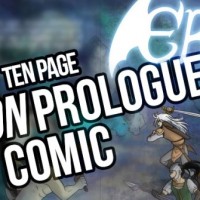 Inheritance Cycle readers have been clamoring for years for a graphic novel adaptation of the series, and thanks to one talented fan, we’re able to read the entire prologue in comic/graphic novel form! As the opening to the series, “Shade of Fear” has stuck with many of us as one of the best scenes in
Read More
Have you read Eragon multiple times? Love talking obscure details and things you picked up on with your friends and in the community? Consider yourself one of the biggest Eragon buffs out there? If you answered yes to any of those questions (and we imagine many of you did!), we’d love to have you contribute
Read More
It’s hard to believe that today marks eleven years since the release of Eragon! That’s over a decade of dragons. Last year, a special 10th anniversary collector’s edition of Eragon was released to celebrate the book’s milestone. The book, which is still available, features a faux textured blue leather cover and binding complete with a
Read More
As we all prepare to head out for San Diego Comic Con, Christopher Paolini has written an exclusive article for Shur’tugal fans looking back on his six trips to the pop culture convention! As we mentioned yesterday, Shur’tugal and Lytherus are teaming up to cover all aspects of San Diego Comic Con starting today, running
Read More
Shur’tugal and its sister site, Lytherus.com, are excited to announce that we are teaming up for San Diego Comic Con 2013, the world’s largest pop culture convention! Christopher Paolini will also be on site, sitting on panels and holding book signings. Our staff will be hard at work covering everything San Diego Comic Con offers,
Read More
Christopher has once again returned to Lytherus, our sister site covering all things fantasy, scifi, and horror, with a new blog post! This time, the author takes a look at what makes a story interesting, focusing on the art of using twists to tell a good tale. The post is full of useful information for
Read More
Christopher Paolini took to Twitter to announce that he’s started work on his contribution to what will become the 10th anniversary edition of Eragon! Eragon was first published by Random House Children’s Books in 2003 after the rights were purchased from the Paolini family, retiring their self-published edition. Christopher shared that six illustrations in total
Read More
You asked and we (with the help of Christopher) have delivered: Christopher has generously provided us with a high quality photo of his end-of-Inheritance sketch, posted yesterday, which depicts the final scene in the Inheritance cycle. We encourage you to check out the full post from yesterday for context on the drawing’s creation. Click the
Read More
Christopher Paolini recently showcased his art skills in several drawings included in the Deluxe Edition of Inheritance, which released in North America at the end of October. The author, who is on currently traveling through Italy following a brief promotional tour to promote the Deluxe Edition, took to Twitter to share his latest sketch –
Read More