Past the blackened peaks of Helgrind and across the glassy span of Lake Leona lies an incredible epitaph for a legendary Dragon Rider.  Upon a cliff, encased in a cocoon of diamond, is where Brom the Rider was laid to rest during the tragic events of Eragon. Both Eragon and Saphira left their marks of respect where Brom was buried, with Eragon writing a small dedication and Saphira infusing the original sandstone tomb with magic, transforming it into diamond.

Though he didn’t know it at the time, Eragon had actually buried his father.  Despite this lack of knowledge, Eragon still was moved enough by Brom’s teachings and friendship to pay eternal respects to a man he looked up to as a father figure, writing a message at Brom’s tomb:

Perhaps the note was a mere coincidence… or it could have been more. Was the young Rider’s subconscious already aware of Brom’s true role as his father? Did Saphira’s hidden knowledge of their true relationship spill over?

Below is a piece of fan art created by the talented Anutwyll, showing Eragon and Saphira at Brom’s tomb.  This piece of art is actually very interesting, as it echoes visuals from the pair’s first and second visits to the tomb.  When Saphira transformed the tomb from sandstone to diamond, she did so by touching her nose to the surface, while Eragon appears to be carrying Brisingr at his side in this view which would lend one to believe this was Eragon fulfilling his promise to one day return to the grave. 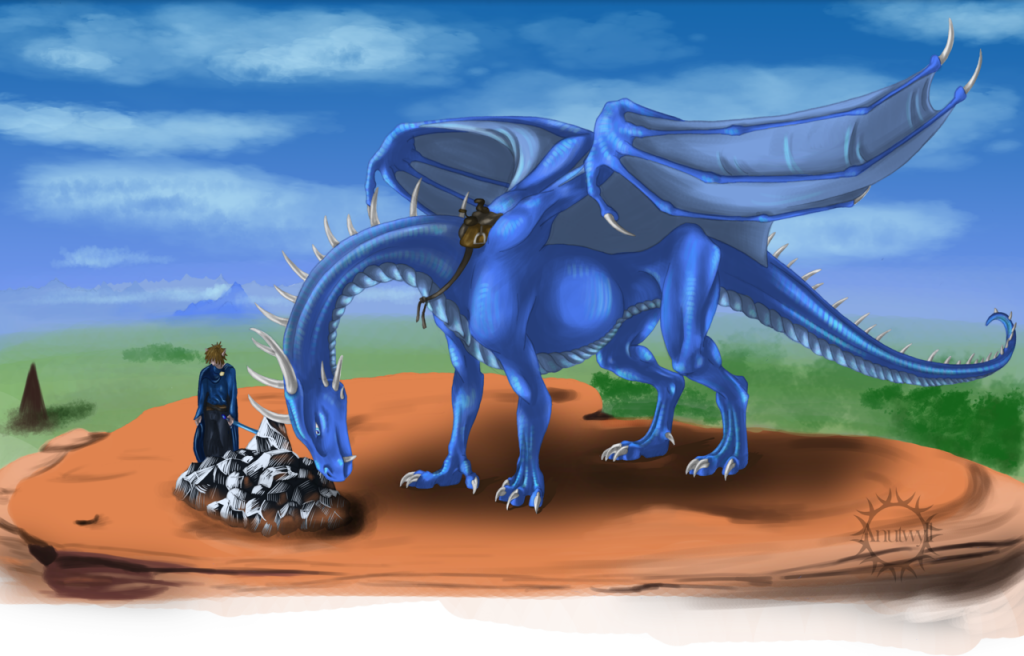 Upon returning to the tomb as promised, Eragon made a few lasting improvements to pay his very final respects to his father in Inheritance chapter “A Fitting Epitaph”:

The hill looked exactly as Eragon remembered.  When he gazed upon it, he felt his chest grow tight.

Saphira landed next to the tomb.  Her claws scarped against the pitted stone, chipping off flakes.

With slow fingers, Eragon unbuckled his legs.  Then he slid to the ground.  A wave of dizziness passed through him at the smell of the warm stone, and for a moment, he felt as if he were in the past.

Then he shook himself, and his mind cleared.  He walked to the tomb and looked into its crystal depths, and there he saw Brom.

There he saw his father.

Now we ask:  How did Brom’s death first move you? Do you think Eragon was forced to mentally relive Brom’s death after he discoverd Brom was his father? Will Eragon and Saphira visit Brom’s grave in the future? Let us know in the comments!