Home
/
Eragon Movie
/
Eragon in Other Media: Could Eragon work as an anime, graphic novel, or video game? (Part two)

From successful fantasy/dragon television shows such as Game of Thrones to anime such as Avatar: The Last Airbender to the rise of comics and graphic novels, we think there’s a lot of potential for Eragon to work in other media. Our first article discussed television shows, miniseries, and animated films. In our second article, we explore anime, comics/graphic novels, and a video game!

Anime has enjoyed tremendous popularity in Japan for decades and spread to the United States thanks to popular shows such as Naruto and Bleach, and critically acclaimed Studio Ghibli films like Spirited Away and Howl’s Moving Castle. Series such as Full Metal Alchemist, Deathnote, and Attack on Titan continue to grow in popularity even beyond the traditional American crowd and closer to the mainstream.

Nickelodeon’s Avatar: The Last Airbender and its sequel series, The Legend of Korra, brought millions into the wonderful world of anime-inspired shows, art style, and immersive storytelling. Avatar utilizes an fantastical magic system (“Bending” the elements), features many fantastical beasts, and manages to maintain compelling, involved story lines that pull the reader in and avoid the cheesiness occasionally seen in traditional anime. The shows manage to successfully incorporate tremendous character depth and development, rich and always-advancing plots, and relatable stories, captivating audiences for the better part of a decade.

Eragon and the world of Alagaësia may be a perfect fit for an anime series. Its rich world, endless adventures, detailed magic system, and a host of fantastical creatures could play well in the medium. Full Metal Alchemist: Brotherhood and Fairy Tale (both highly recommended and available on Netflix) manage their rich magic systems incredibly well, as do our Avatar and Korra examples from above. The exaggerated animation style popular in anime would allow for the inclusion of incredible magic effects found throughout the Cycle and may even offer an easier time funding the regular inclusion of dragons, magic, and epic battles. Additionally, things that simply wouldn’t be possible in live-action films or shows can be done within anime, and while we saw them attempt Eragon and Saphira’s telepathic relationship in the Eragon movie, we think that experience would better translated in an animated show.

Many would argue that Eragon’s universe isn’t suited for the anime style. Can an anime series manage to capture the gritty, dark, and real aspects of the universe? We think so! Detractors may claim that anime doesn’t have a wide enough appeal, or can be too goofy for a story such as the Inheritance Cycle, but exploring the anime examples from above may help ease those fears.

Fans have been clamoring for a graphic novel interpretation of the Inheritance Cycle for years. We’ve even seen fan artists tackle the series in a comic fashion, illustrating their take on the prologue and several other memorable events from the Cycle, including Durza’s death and Eragon and Saphira’s visit to Vroengard: 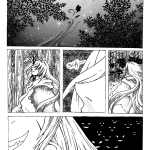 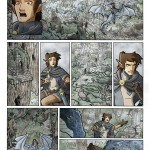 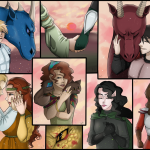 However awesome these fan creations are, they aren’t official, and none contain more than a few strips. Christopher’s brilliant writing in the Inheritance Cycle easily helps readers conjure up their own images and character appearances as they follow Eragon, Saphira, Roran, and Nasuada on their adventures through Alagaësia. How great would it be to have a graphic novel that took it one step further, actually providing official imagery along with Christopher’s narrative?

We’ve asked Christopher about the potential of publishing a comic or graphic novel based on the series or set within the universe, and while he did say the concept is intriguing, there are no current plans to release such content. If Christopher or his publisher ever did decide to go this route, there are a few options to explore:

– Reimagine the series as a series of graphic novels, tackling the Cycle and its events in chronological order. Side releases could tell the tales of characters whose points of view aren’t featured in the books, such as Murtagh and Galbatorix
– A story outside of the series’ four books, such as the Fall of the Riders told from Brom’s prospective
– An entirely new post-Cycle adventure featuring old or new characters, such as the new dwarf and Urgal Riders, or even following Eragon and Saphira’s attempts to train the new generation of Riders

The possibilities are endless! The heaps of fan art available online demonstrates the community’s interest in seeing Alagaësia brought to life in such a way. The 10th Anniversary Collector’s Edition of Eragon took this one step further by commissioning renowned artists to interpret scenes from the book, with the final illustrations published within the novel. Christopher himself has dabbled in comics, as seen in an art gallery on Paolini.net (note: they aren’t Inheritance Cycle comics).

While not the best alternative to a film, it’s a medium we would love to see the Inheritance Cycle featured in, complimenting the books and potential movies.

With a new generation of consoles, PC gaming at an all-time high, and mobile gaming entering the arena, we think it’s time for the Inheritance Cycle to be brought to life as a video game!

Fox attempted to release several Eragon video games in 2006 alongside the film, and like the movie, it failed to impress critics and gamers. The game never stood a chance, having been developed for Xbox and Playstation 2 when those were no longer current-generation consoles. The release of the Xbox 360 and Playstation 3 months before the game’s release resulted in the title being largely ignored, and the negative publicity from the movie didn’t help its reputation. Sub-par graphics, cheesy gameplay, and a story line similar to the film all but doomed the console game. An RPG-style Game Boy Advanced game was also released but suffered a similar fate (although the game impressed some book fans, who stated that it was generally better than the console release).

Not content with the official offerings, Inheritance Cycle fans took it upon themselves to bring Alagaësia to life in a variety of ways: two groups have worked on building Alagaësia in Minecraft, a popular building and adventuring game, while a third group worked on and supported the Minecraft Shur’tugal Mod, allowing players the ability to discover and raise dragons, becoming Riders. Other groups attempted to create Eragon-inspired Skyrim modifications, and many have participated in ongoing text-based RPGs.

Many fans have expressed interest in an Alagaësia-based MMORPG (Massively Multiplayer Online Roleplaying Game), similar to games such as EverQuest, World of Warcraft, and Guild Wars. MMORPGs allow gamers to create, customize, and play a character of their own in a massive world filled with thousands of other players, with virtually endless progression options for the player and their companions. An Eragon MMO could allow players to choose their race, abilities (warrior, archer, caster), and once the player reaches a certain level, the possibility of becoming a Rider would unlock, offering a chance to discover a dragon egg, bond with the dragon, and become a Rider. Frequent updates to MMOs, called “patches,” would allow for a fluid, ever-growing story, and wouldn’t necessarily have to take place during the series – instead, it could be based either before the Riders’ Fall or after the events of Inheritance, once the new Riders have been repopulated.

If not an online game, a standard roleplaying game could work just as well. While an MMO allows players to game with thousands of other players, such an environment could run the risk of feeling as though the world has too many Riders, taking away from the magic and wonder of being one of a select few. Instead, a single player game would allow the player to take on the role of an entirely new Rider, chosen by a dragon’s egg and training alongside their new companion, growing, fighting, and forging a new future for Alagaësia.

Advances in graphics and storytelling within video games offer a unique opportunity to bring Alagaësia to life, rehashing the books’ plot or crafting an entirely new story within the universe. This would truly allowing the reader/gamer to immerse themselves into the world in the way that a book, movie, or television show can’t. Being able to explore the world shape its future would be the ultimate way to enjoy Christopher’s universe.

The first part of our “Eragon in other media” article discussed television shows, animated movies, and a television miniseries! Don’t miss out on exploring those ideas.

Now we ask: Of all of our ideas (excluding a film), which media would you choose for Eragon to appear in? Do you have any ideas we didn’t cover? Let us know in the comments!