This two part behind-the-scenes look at the creation of The Inheritance Almanac, starting with the founding of Shur’tugal and walking through the many inceptions of the book, will hopefully give fans a glimpse into the creation of one of the world’s largest fantasy-oriented fan sites and the process behind creating a 200+ page companion guide. Cycle fans looking to become authors themselves will also enjoy the story and perhaps find inspiration, ideas, and advice for their own personal journey. With part one already released, it’s now time to share the second and final installment of our “Making Of” series!

If you haven’t already, we highly recommend reading part one of the “Making Of” The Inheritance Almanac before reading the second part. Part one tells the story of Shur’tugal’s creation and interesting history, as well as introducing readers to the original companion guide – the one that didn’t (and never will!) make it to stores.

Interestingly, the tale of my initial failure with a companion guide is slightly more exciting than the success that lead to the release of the Almanac as you see it now. I wasn’t deterred by the “mess 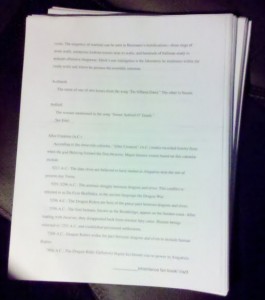 One of the many manuscripts for the Almanac.

” I realized my first draft of the original companion guide to be; in fact, I was perhaps more inspired than ever to write a book that people would actually purchase. Having those notes and early drafts staring at me from a folder on my desktop while I began work on “Companion Guide 2.0” was key to my inspiration.

I have been fortunate enough to work closely with the Paolinis and the amazing folks at Random House over the past six years on various projects, mostly surrounding the Inheritance cycle. As I mentioned in part one, their success was one of the major driving forces behind Shur’tugal’s initial and long-term success. I was also fortunate enough to work closely with Simon Lipskar, the Paolini family’s literary agent (and a genuinely brilliant and amusing individual).

The spark that ignited the serious attitude toward the guide was an offer I received from a small publisher based in California before I had actually given serious thought to actually publishing a book. To me, the companion guide was never anything more than something I would self-publish or release digitally through Shur’tugal. However, a book offer forced me to begin pondering the prospect of actually publishing a book (in the real sense of the word), and also made me realize that I’d be in over my head when it came to dealing with any sort of book offers or contracts.

When I first mentioned the idea of an official guide to my friends at Camp Inheritance, I was met with positive encouragement… but could not ignore the fact that I brought it up at a very confusing time. Eldest and the Eragon movie had both just released and the folks at Camp Inheritance were more than overwhelmed with preparations for Brisingr. Vroengard Academy was in full swing, Random House was working full-force on the marketing and promotion leading up to the release of the third book, and the Paolinis were working hard to complete editing of Brisingr. Interest existed around a possible companion guide, but any further thought had to wait until people were actually getting sleep. I always admired their drive and was more than happy to sideline the book (especially considering how busy we were with Shur’tugal).

It was during this time that Simon (the Paolini’s agent, as mentioned above) had agreed to represent me in my dealings with publishers regarding the companion guide. I was ecstatic to have Simon’s help, not only because he had been so incredibly helpful and generous over the years with Shur’tugal and all things Inheritance, but because I knew he was the right person to have on my side as we tried to find the right home for the book.

Over the next several months, Simon kept in touch with Random House regarding the companion guide, but Brisingr was still in full swing. Shortly after the Brisingr crunch, which included the brilliant Vroengard Academy viral marketing campaign, the release of Brisingr, and Christopher’s North American post-release tour, I was informed that Random House was officially interested in publishing a fan companion guide to the Inheritance cycle. This awesome news sparked the series of official publisher dealings that I’ll never understand (that’s what your agent is for), and in the end, Random House was the official home for the companion guide. They were the perfect fit; Random House had always been so positive about Shur’tugal; so friendly toward a sixteen-year-old fan site webmaster; and then, so positive about the prospect of a fan guide that they were willing to give it a shot! 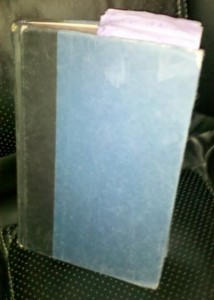 My first (and very worn/beat up) copy of Eragon.

Initial brainstorming meetings started shortly after the Brisingr book tour was complete. Mark Vaz, author of many official movie and book companion guides, including Mythic Vision: The Making of the Eragon Movie (and many others), was brought on board as the seasoned project manager/editor/contributor/magic worker. Mark, Michelle Frey (Christopher’s editor at Random House), and I spent several phone meetings discussing how the book would work, what it would contain, and a timeline for when everything would be due. The book’s contents were solidified and the beginnings of a work timeline were established.

Honestly, this book would not be on shelves if not for the inspiration, help, and hours of work put in by many of my friends and colleagues. 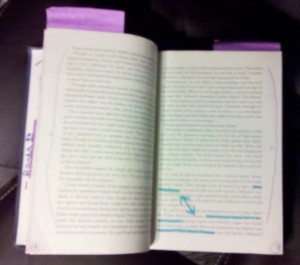 I’m sure there are parts of the story that I’ve forgotten, people who were unintentionally left out of my thank you who I still appreciate as much as everyone else, and questions that remain. If you are curious about any part of the process of writing the Almanac, or have any questions on advice I may be able to offer you for your own journey to publication, please do not hesitate to ask in the comments!

And of course, if you haven’t already checked out The Inheritance Almanac, we highly recommend you do so. This book was written for the fans and by a fan as a companion guide to take with you on your first or final trip through Alagaesia. The information, research, and random facts found within are ones you won’t find anywhere else. You can find copies of the Almanac in all book stores or by visiting your favorite book retailer online. Thank you for your support!