Home
/
Inheritance Cycle
/
Everything we know about the Official Eragon Coloring book and its illustrator, Ciruelo!

Last week, we announced the Official Eragon Coloring Book: a collection of over 40 illustrations from the world of Alagaësia by award-winning artist Ciruelo Cabral! Since then, we’ve dug up and collected everything there is to know about the upcoming book and its illustrator!

Pre-order your copy of the Eragon Coloring Book on Amazon for just $15.99!

Ciruelo is an award-winning fantasy artist whose work heavily features dragons! His illustrations have adorned book covers (even some by George Lucas!), Magic: The Gathering cards, magazines, and more. The painter has brought Alagaësia to life on numerous occasions, illustrating Eragon and Saphira together for the 10th Anniversary Collector’s Edition of Eragon, as well as two different renditions of Saphira. 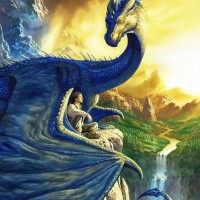 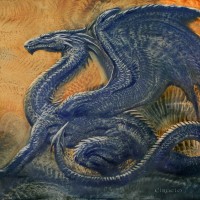 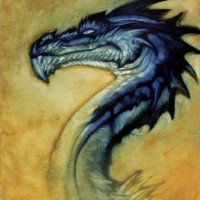 What does Christopher think of Ciruelo’s interpretation of Alagaësia?

Christopher has always been a big fan of Ciruelo and his work, stating the artist is “a friend and one of my favorite dragon artists. He’s done an amazing job with Saphira, Thorn, Fírnen, and all the other dragons of the Inheritance Cycle! I love how he’s brought Alagaësia to life through his drawings of scenes, characters, and locations from the entire series.”

Will any other artists feature in the coloring book?

Yes! Christopher’s well-known illustration of Saphira’s eye, featured on the cover of the self-published edition of Eragon as well as inside each of the Random House editions of the Inheritance Cycle books, will also be included! Fans will be familiar with Christopher’s other art: he created the map inside each book, the dragon eyes found inside the regular and Deluxe Editions, plus additional artwork such as Brisingr, Brom, and more.

What exactly will be in the coloring book? 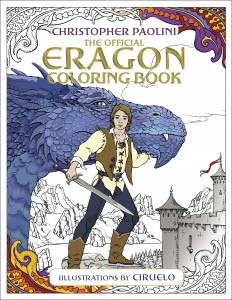 “Immerse yourself in Christopher Paolini’s land of Alagaësia in this captivating Eragon coloring book that features more than forty pieces of brand-new, exclusive art from award-winning fantasy illustrator Ciruelo, with perforated pages that allow you to easily remove your favorite images for bulletin boards or frames.

From the quiet dignity of Eragon to the strength of Roran, from the majestic heights of the Beor Mountains to the somber beauty of Brom’s tomb, the world of Eragon is at your fingertips. Filled with heroes and villains, mountains and deserts, Alagaësia is an unforgettable place, with surprises around every corner. Complemented by memorable quotes from the internationally bestselling Inheritance Cycle, this book offers you a chance to personalize the world that’s always been so vivid in your mind’s eye.

Also included is a note from Christopher about the vital role of art in his life, and a piece of his own art for readers to color.”

Pre-order your copy of the Eragon Coloring Book on Amazon for just $15.99!

Okay, so when can I get my hands on this?!

Have you pre-ordered a copy of the book? What scene are you most hoping to illustrated? Let us know in the comments!