Book Expo America went out with a bang: Christopher Paolini was honored with a Guinness World Record during the final day of BEA 2011! Shur’tugal and Lytherus staffers were on hand to cover the event, which included brief speeches from both the Guinness World Records’ presenter. We also returned with pictures from the presentation and Christopher receiving the award. Keep reading for all of this and more!

The event took place on the Book Expo America show floor at the Guinness Book of World Records booth. Dozens of fans crowded around the booth as on-lookers shortly after the sign was erected announcing the award event for the author. Christopher himself was lingering in the corner speaking with Guinness World Records employees waiting for the event to begin.

Once the event kicked off at 11am here in NYC, the Guinness Book of World Records representative stepped up with a copy of the 2012 edition and began a speech discussing the importance of GBoWR at BEA – they’ve been a staple of the show floor for many years. They have made a tradition of presenting one book-related award to an author or book-related person or event each year they’ve attended. This year’s recipient would be none other than Christopher Paolini.

Christopher’s award was presented for his accomplishments and success with the Inheritance Cycle. The first three books in the Cycle – Eragon, Eldest, and Brisingr – have sold a staggering 25 million plus books since their initial debut with Random House in 2003. This figure doesn’t include Inheritance (Book 4), which is set to launch with a first print of 2.5 million books in North America alone.

The record Christopher had set was the record for the youngest author to have sold the most books (best-selling author) in the world – ever.

Christopher was presented the award and received serious applause from his impressed audience of fans and followers. Christopher followed the presentation with a speech, thanking all of those in attendance and those who weren’t – his fans – who have made it all possible over the past decade. Christopher also thanked his family and those he works with in the industry who have assisted him along the way.

The newly-minted Guinness World Records holder (what a cool title!) also shared two interesting stories with the audience during his acceptance speech. He first told onlookers that the World Records book was a staple in the Paolini household growing up, with a new edition being added each year and devoured by the author upon its arrival. 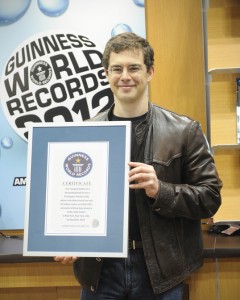 His second story touched a funnier note: he shared the story of jokingly bragging to his sister Angela so much about receiving the award before leaving for New York City that she eventually told him to quit talking about it! Christopher noted that he’s simply proud of the accomplishment, thus the desire to share the news, because he had always grown up admiring record holders and never thought he’d be one himself.

Christopher lingered in the booth following the event, taking photos and signing autographs for all of his fans in attendance. The event was a fun, unique, and exciting end to an incredible Book Expo America 2011!

Don’t forget to check out our extensive coverage of all of Christopher’s events at Book Expo America!

Also be sure to follow our non-stop coverage of all things fantasy, scifi, and horror at BEA 2011 over on Lytherus.com!