Home
/
Inheritance Cycle
/
Tales from Alagaësia
/
“The Worm” – The Urgal legend with a massive new dragon!

The upcoming Cycle book The Fork, the Witch, and the Worm is rapidly approaching its release on 12/31! Today we’re setting out to unravel the third great mystery in the title: The Worm!

We previously picked apart the clues and details surrounding “The Fork” and “The Witch,” both of which are still heavily shrouded in mystery. Does Murtagh have a fork, or is he facing a fork in the road? Is Angela a Time Lord, or does she enjoy observing the stars? We may have found some answers, but we raised plenty more along the way. And the third and final short story is the most mysterious yet. Let’s dive in!

You may also enjoy: “Everything we know about ‘The Fork, the Witch’ and the Worm’!”

Who does “The Worm” belong to?

Unlike the first two stories “belonging” to main characters – Murtagh and Angela – we don’t think this story “belongs” to anyone (that we know of, at least). Instead, if it’s the Urgal legend we believe it to be, it’ll likely be told by a throwaway character (or another we’re familiar with, but it won’t center on them)… or perhaps shared with Eragon on paper, such as Angela’s memoir is given to him.

The Fork and The Witch have been “claimed,” leaving only the “exciting Urgal legend” left to fill the only remaining slot. With this in mind,”Worm” seems oddly fitting for an Urgal legend. Their past wars and encounters with dragons – wild and ones bonded with Riders – leave a past ripe with encounters and tales to share. With their own unique language and culture, it isn’t too much of a stretch to assume that they have their own words to refer to dragons, and “Worm” is likely one. That would explain the narrative use for “Worm” rather than “dragon”… but there’s always the possibility that it was used simply because it makes for a catchy title!

With the third short story directly referencing a dragon, we feel comfortable assuming that the cover art is related to the third short. Before diving any deeper, it’s important for us to note that Christopher Paolini confirmed that the dragon is not Shruikan, who had ice blue eyes.

You may also enjoy: “Rhymes and Riddles” – an excerpt from the upcoming book

Our guesses for other possible stories for the dragon to be a part of:

Part of another story: Very unlikely to be a part of “The Fork,” given that it’s set to follow Murtagh. There’s a small possibility that it’s part of Angela’s memoir, given that we know so little about the witch and her past… she’s centuries old, so we’re sure she’s encountered her fair share of dragons (she even mentioned seeing wild dragons), one of whom could be this red-eyed worm.

Part of the Eldunari’s vision: A vision from the Eldunari is mentioned in the book’s synopsis. Whether that’s a vision of the past, present, or future remains a mystery. A vision of the past could certainly include an unknown dragon. A vision from the future could reveal a new dragon to come (although one of this size seems to indicate it’s a very old dragon). And a vision of the present… well, the dragon definitely isn’t in any known part of Alagaësia during the time of the story, as it’d be quite hard to miss. If the Eldunari did find this dragon, it’d be in the uncharted lands, such as where the new dragonhold is located.

We think the most likely and obvious conclusion is that it’s a part of the Urgal legend – a dragon from the past.

There’s another artistic component to the story: the piece of artwork Christopher illustrated for “The Worm” features what appears to be a carved and decorated Urgal horn. This ties in well with the Urgal legend.

So what’s the story?

So all we know is that it’s the “exciting Urgal legend.” Whether at a fireside chat (Angela’s “Mooneater”) or told in the great halls of an Alagaësia city, legends are epics passed down from generation to generation, often growing more elaborate with each retelling. Most importantly, legends aren’t always true. While most are regarded as historical, many have been stretched far beyond plausibility and others have no basis in reality. Our guess is that the cover dragon is a core component of the Urgals’ legend. Urgal tribes would have had many encounters with dragons throughout their long history – probably more bad than good – and this legend could be a retelling of one of those encounters. It’s impossible to know if the legend will be based on truth or fantasy, but we’ll soon find out! Will the dragon be a foe the Urgals go to war with, or a revered warrior they live in harmony with? A terror from the skies or a fellow hunter? Its red eyes seem ominous, but we won’t jump to any conclusions (yet). Using the trees for scale, this thing is massive. Urgal culture and history is something we never got to see much of in the Inheritance Cycle. An entire short story revealing part of the race’s past should shed some light on the often-feared race, and will hopefully help humanize the way we (and other races in Alagaësia) see them.

Figuring out the location of the dragon on the cover could give us some hints as to what the story will contain. In an earlier post, we theorized that the dragon is resting upon Helgrind: Christopher’s inspiration for the Helgrind, center of worship for a disturbing religion and hideout of the Ra’zac was Shiprock, a massive land formation in New Mexico. In the books, Helgrind is described as a mile high land formation topped by four peaks. Let’s look at the cover side-by-side with a photo of Shiprock: 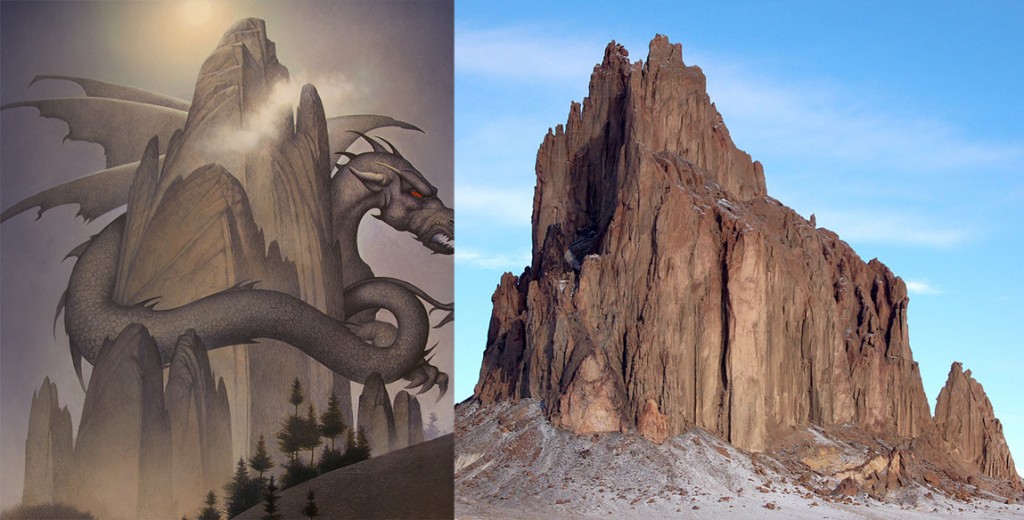 Helgrind would make for an odd location for an Urgal legend, given that the area is (and has been for many years) populated by humans.

Our best guess: The dragon is the antagonist in an Urgal legend about war. It’s possible the story predates humans’ arrival at Helgrind, and if so, the dragon could be a villain in a tale of an early Urgal settlement around the rock formation. The cover dragon’s existence in the present is impossible, so we can say conclusively that the worm belongs to The Worm. Beyond the above, we don’t really know – and the mystery is half the fun!

What will the Urgal legend reveal? Is the dragon a friend or foe? We’d love to hear your thoughts!