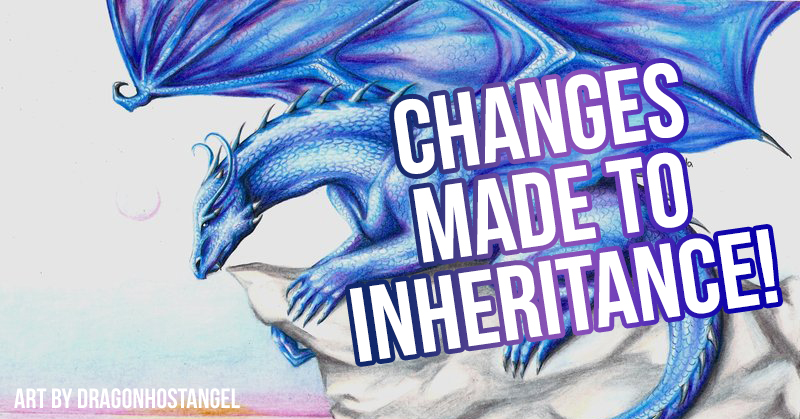 Few Cycle fans know that Inheritance has changed, and in some cases, had content added to it, since its release in 2011. The inclusions resurfaced recently when Christopher responded to a fan asking whether or not Jeod ever got his ride on Saphira. That, and even more exciting content, can now be found in newer editions of the book! We’ve highlighted all of the changes below!

For those looking to read the revisions in the book itself, copies of the Deluxe Edition of Inheritance and all copies/ebooks published after that are guaranteed to have the revisions included. Earlier copies may still have the original text.

Jeod got his ride on Saphira after all! The four paragraph adventure was included in chapter 73, “Pieces on a Board”:

As soon as it was convenient, Eragon fulfilled his promise to Jeod from so long ago by arranging for him to fl y upon Saphira. That is, of course, only with Saphira’s consent. Eragon expected her to object, but she agreed without complaint.

The flight took place on a clear and windless day. With a sweep of her wings, Saphira rose from the ground and carried Jeod aloft. For an hour or more, she fl ew with him high above Ilirea, turning and twisting in the morning light while Eragon watched from below and thought of Brom.

When she landed, Eragon saw tears on Jeod’s cold-reddened cheeks. The man carefully climbed down off Saphira, then touched her on the side and, in a quiet voice, said, “Thank you, Bjartskular.”

She bowed her head and hummed in response.

Three Eldunari remained with the eggs left behind in Ellesméra. This change was included in chapter 74, “Fírnen”:

Along with the eggs went three of the Eldunarí— dragons who had decided to remain among the elves, both to serve as mentors for Fírnen and the dragons yet to hatch, and because they preferred, for reasons of their own, to remain in Alagaësia.

Once the eggs hatched, they and their Riders would answer to Arya, Fírnen, and the three Eldunarí until they were old enough to join Eragon, Saphira, and the rest of their kin in the east.

The Eldunarí could, of course, serve another purpose: an added line of defense should Ellesméra ever come under attack. Their power, added to the might of the elves, would be formidable.

Eragon again meets the wounded warrior first encountered in Brisingr. This change was included in chapter 63, “Fire in the Night”:

The new additions are too significant to include in full. There’s over two pages of new content, which starts with Bregan (a blind warrior who can “see the light”) mentioning that his sight is no longer what it was:

Eragon raised a hand, forestalling further comments. In a gentler voice, he repeated himself: “What do you see, Bregan?” The cook turned his mad gaze downward, toward the swirl of stew. “Less than before, Shadeslayer. My sight has dimmed from those first few days. Glorious days. Days of fire.”

“But you can still see some.”

Bregan pushed out his jaw and nodded.

Bregan continues, sensing the missing light around Eragon’s waist (Belt of Beloth the Wise) and finger (Aren), but the man can still see the light in Eragon’s sword and within the Rider himself:

“You no longer have stars bound around your waist. Nor a star . . . upon your hand?” Eragon nodded, and Bregan seemed to gain confidence. “But the pommel of your sword still burns, burns like a torch in the dark, it does. And you, Shadeslayer. You shine like Murtagh now. The light of a thousand suns pours through you. Only, there’s no rage to it.”

Lastly, Eragon asks Bregan what he can see within Urû’baen, and his answer is vast and very interesting:

“[T]he city has a glow. There are lines and weaves of light hanging off of every chimney and spout, thick as spiderwebs in the spring. […] I’ve not seen anything like it before. Brightest of all is the citadel. Every stone is lit from within.”

“Can you make out anything of Galbatorix?”

“The light from the citadel, it has a strange cast, as if . . . as if ’twere not entirely natural.”

The skin around Bregan’s eyes bunched into wrinkles as he squinted in the direction of Urû’baen. “It’s hard to explain. It’s more a question of flavor than anything else, like the . . . like the taste of an apple that’s turned compared to one that hasn’t. Tread carefully if you go near that building, Shadeslayer. Tread most carefully.”

Could it hint at something more to come? The character’s abilities are unique and the potential is vast… will we see him in Book 5, or perhaps even his own story?

Several smaller changes were made in addition to the ones above, all of which Christopher listed in the Deluxe Edition:

What’s your favorite new addition to Inheritance? Let us know in the comments!