Big news in the world of Paolini: Christopher has officially finished the first draft of his science fiction novel!

The new book has been a work-in-progress since 2012/2013, beginning with nearly ten months of planning and research. While working on the manuscript, Christopher regularly shared progress updates, including photos, as he completed new chapters.

Christopher took to Facebook to deliver the exciting news in the form of a brief statement accompanied by two photos of the finished manuscript: 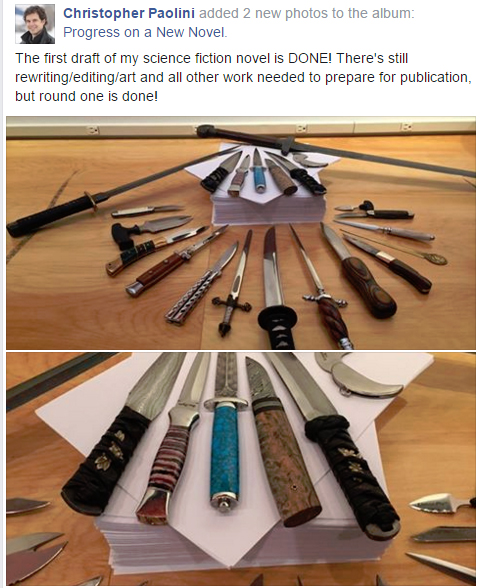 Christopher hasn’t shared much information on the book, other than to confirm that it’s a sci-fi novel that takes place in the same universe as ours, and is “full of aliens, spaceships, lasers, strange new planets, and explosions”!

It’s important to note that finishing the first draft of a manuscript is just the first step to publishing a novel. We won’t see the book in the next few months, but it’s possible that we could see the book toward the end of 2016 or early 2017! (This is purely speculation.)

Curiously, Christopher mentioned that artwork still needs to be completed for the book. As we all know, much of the author’s artwork adorns the inside of the Cycle books, including his map of Alagaësia, various dragon eyes, swords, and more. Will this new novel feature maps and other art drawn by Christopher? Time will tell!

Now we ask: Are you excited to get your hands on the new book? What do you hope to see included?