Fans of fantasy literature, and genre literature in general, are no strangers the various tropes and generalities often referenced when it comes to their favorite entertainment. One such trope that longtime followers of traditional fantasy and science fiction may have heard in the past is a lack of strong female lead characters with major impact on the climax of a story.

Fortunately for fans of the Inheritance Cycle, the diversity among the cast of primary characters is robust, and offers readers a variety of threads to follow for their favorite champions of Alagaësia.

While main male characters Eragon, Roran and Murtagh all have major roles in defeating Galbatorix and saving Alagaësia from certain doom, they would have never been able to accomplish such a feat without a few of their female contemporaries: Arya, Nasuada, Katrina and Angela.

Though these four characters have varying personalities, they all found ways to have similar impacts on the stories of Inheritance. All four women were at some point imprisoned by the Empire, but showed toughness and resolve to survive and rise above being contained. Arya and Nasuada both shouldered the burden of leading their people, (the elves and the Varden, respectively), while Angela and Katrina quite often served as beacons of light when times were at their darkest.

We now share with you a selection of hand drawn fan art from artist ElakuDark, found on Deviant Art entitled, “The Inheritance girls”.  This piece profiles the four main heroines of the Inheritance Cycle.  Arya, with her arms crossed and stoic demeanor, is a reminder of her constant dedication to protecting the realm.  Nasuada, with proud shoulders and bearing the bandaged proof of her ordeal with the Trial of the Long Knives while Katrina stands strong are both unwavering.  Finally, we mustn’t forget Angela, and though she is regularly enigmatic and radical she is also deadly, as her readied huthvir shows. 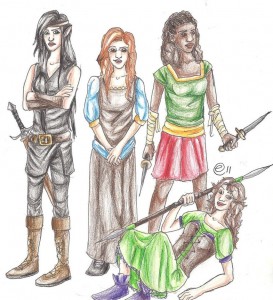 Below we have a small section from the chapter “The Council of Elders” in Eldest, where Nasuada is appointed leader of the Varden, and her life changed forever:

“Nasuada, Daughter of Ajihad, the Council of Elders wishes to formally extend its deepest condolences for the loss you, more than anyone else, have suffered….”  In a lower voice, he added, “You have our personal sympathies as well.  We all know what it is like to have a family member killed by the Empire.”

“Thank you,” murmured Nasuada, lowering her almond eyes.  She sat, shy and demure, and with an air of vulnerability that made Eragon want to comfort her.  Her demeanor was tragically different from that of the energetic young woman who had visited him and Saphira in the dragonhold before the battle.

“Although this is your time for mourning, a quandary exists that you must resolve.  This council cannot lead the Varden.  And someone must replace your father after the funeral.  We ask that you receive the position.  As his heir, it is rightfully yours-the varden expect it of you.”

Nasuada bowed her head with shining eyes.  Grief was plain in her voice when she said, “I never thought I would be called upon to take my father’s place so young.  Yet…if you insist it is my duty…I will embrace the office.”

So now we ask: Which female Inheritance Cycle character is your favorite? Would you like to see a future story in Alagaesia from their point of view?