Now a resting ground for hundreds of deceased dragons and Riders, Vroengard Island and its capital, Doru Araeba were referenced and discussed throughout the entirety of the series. What once once represented the Riders’ strength and their status as a beacon of hope and prosperity was reduced to rubble in a single battle. For years, the island stood as a cautionary tale for those who dared oppose Galbatorix. It was here that the mad Rider and his allies committed the atrocities that nearly led to the extinction of the dragons and the fall of the Riders.

Radiation permeates throughout the island to this day, a result of the dragon Thuviel sacrificing himself in an attempt to defeat Galbatorix and the Foresworn. The land’s poison resulted in the creation several new species, including the snalglí and burrow grubs encountered by Eragon, Saphira, and Glaedr. Most importantly, it was here that Eragon finally discovered the Vault of Souls.

In this incredible piece of fan art, the talented artist Eumenidi captures the moment when Eragon, Saphira, and Glaedr fly over the mountains and first glimpse Doru Araeba in the Inheritance chapter “Amid the Ruins”. The graphic novel-style strip shows Eragon’s shock, anger, and reaction as they explore the ruins.

Relive the scene from the book alongside this beautiful graphic novel-style artwork:

Before them was a huge bowl-shaped valley, encircled by the steep mountains they had seen poking through the tops of the clouds. A dense forest of spruce, pine, and fir trees blanketed the sides of the mountains as well as the foothills below, like an army of prickly soldiers marching down from the peaks. The trees were tall and mournful, and even from a distance Eragon could see the beards of moss and lichen that hung from their heavy branches.Scraps of white mist clung to the sides of the mountains, and in several places throughout the valley, diffuse curtains of rain drifted from the ceiling of clouds.

A dozen or more rivers flowed out of the mountains and wandered across the verdant ground until they poured into a large, still lake near the center of the valley. Around the lake lay the remnants of the Riders’ city, Doru Araeba. The buildings were immense—great empty halls of such enormous proportions that many could have encompassed the whole of Carvahall. Every door was like the mouth to a vast, unexplored cavern. Every window was as tall and wide as a castle gate, and every wall was a sheer cliff.

Behold the ruins of our pride and glory, said Glaedr.

While the piece itself is impressive, the artist’s process from line and ink drawings to the completed, colored illustration is interesting in itself: 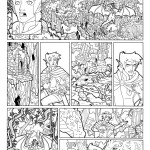 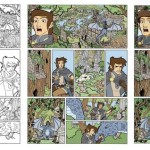 Now we ask: Do you feel as though this piece accurately represents the vision you had in your head of the scene? How would you react if you were able to explore the ruins of Vroengard? Do you think civilization will ever be able to return to the island?