Inheritance Quest has officially launched its fourth playable character this week: Galbatorix! For the first time ever, fans are offered a glimpse at Galbatorix’s point-of-view as the player ventures through Galbatorix’s various experiences, starting with an innocent-yet-ambitious young Rider and leading to the capture and torture of Murtagh.

Inheritance Quest is a text-driven Inheritance Cycle Facebook game produced by Christopher Paolini’s publisher, Random House. The game allows you to play as five popular Inheritance Cycle characters — Angela, Murtagh, Saphira and Galbatorix so far — going on quests, adventures, and tasks all in the shoes of each character. Our very own Mike Macauley played a large role in the game’s development as a creative consultant and co-writer and wrote a majority of the storyline and quest text you’ll see in the game.

Want to learn more about this week’s character addition, including some behind-the-scenes information and a refresher on Galbatorix’s character? Keep reading! 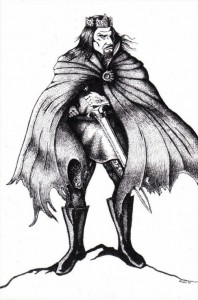 Need a refresher on Galbatorix? Here’s an excerpt from The Inheritance Almanac:

Galbatorix is the once-promising Dragon Rider whose quest for supreme power has changed the course of Alagaesian history. He was born and raised in Inzilbeth (a city that has since been destroyed).  In accord with the tradition by which youngsters were presented to selected dragon eggs, he was chosen by one embryonic dragon to be its Rider.

The ferocity of Galbatorix and his Thirteen Forsworn killed almost all Riders and dragons, what is known as the Fall of the Dragon Riders. When Galbatorix killed King Angrenost of the Broddrings, he declared himself king of Alagaesia.

Galbatorix is feared, and his dream of ruling Alagaesia remains within reach. Galbatorix is firmly in control of his Empire, which spans the western half of the continent and where he maintains his vast standing armies. Galbatorix has begun fulfilling his vision of Dragon Riders beholden to his Empire, beginning with Morzan’s son, Murtagh. The one weakness that Eragon and Saphira have learned about Galbatorix is that his madness has left him with gaps in logic.

Galbatorix was a challenging yet exciting character to write for the Inheritance Quest. Never before have readers of the Cycle encountered Galbatorix close-up or in his point-of-view and we are excited to offer that for the first time. The game offers fans a glimpse at the Rise of a promising young Rider… and his subsequent downfall. Players may also experience his mind games, manipulation, and more. The quests and tasks are exciting, mad, and often-times sad.

We wish you the best of luck as you work your way through the evil that is Galbatorix!