Home
/
The Fork, the Witch, and the Worm – Tales from Alagaësia, Volume One: Eragon
/
Excerpt: Chapter VIII – The Worm of Kulkaras

The Fork, the Witch, and the Worm

Tales from Alagaësia, Volume One: Eragon

This excerpt is the beginning of Chapter VIII in the third part of the Inheritance Cycle spin-off novel, The Fork, the Witch, and the Worm. You can purchase a copy of the book today or learn more here.

The day the dragon arrived was a day of death.

He came from the north, a shadow upon the wind. Soft and silent, he swept across the valley, blotting out the sun with his velvet wings. Where he landed, field and forest went up in flame, drifts of ash choked the streams, beasts fled – and Horned also – and the sounds of grief and terror rent the summer air.

The dragon was named Vêrmund the Grim, and he was an old and cruel dragon, canny in the ways of the world. Word of him had come from the north, but never had there been a hint or warning that he had forsaken his lair in those frozen, far-off reaches.

And yet here he was. Black as charred bone, with a polished glean to his fitted scales and a throat packed full of fire.

The youngling, Ilgra, watched with her friends from beside the spring-fed pool where they so often swam, high in the foothills along the eastern side of the valley. From that vantage, she saw the dragon ravage their farms with fire and claw and the sweep of his jagged tail. When the warriors of Clan Skgaro attacked – attacked with bow and spear and ax – Vêrmund’s flame consumed them or else he trod upon them and thus made an end to their ambitions. Even the sharpest blade could not pierce his hide, and the Skgaro had no spellcasters to aid them in battle. As such, they found themselves at the mercy of the dragon, able only to annoy or inconvenience him, but not to stop him. Never that.

Like the evil worm he was, Vêrmund ate every person who came within his rich: male and female, elder and youngling alike. None were spared. Their livestock too he ate, corralled them with fences of fire and feasted upon the helpless animals until his chops were clotted with gore and the ground a crimson shambles.

All that and more Ilgra saw. She could do nothing to help, so she stayed by the pool, though to wait hurt as much as any wound. Those of her friends who weren’t so wise ran to join the fray, and of their number, many were lost.

As the dragon approached the hall of her family, Ilgra bared her teeth in a helpless snarl. Closer it came, and then closer still, and then with a slow-moving swipe, the scaled monster crushed her home.

A howl tore from Ilgra’s throat, and she sank to her knees and grasped the tips of her horns.

Relief tempered her anguish as she saw her mother scrambled free of the wreckage and, with her, Ilgra’s younger sister, Yhana. But it was a fleeting relief, for Vêrmund’s head descended toward them, his heated maw parted.

From across the fields came sprinting Ilgra’s father, spear held high. The lightness of hope filled her heart. Her father was first among the Anointed. Few there were who could match his might, and though he was small compared with the dragon, she knew his courage was equal to that of the gods’. Four winters ago, a hungry cave bear had come prowling down from the mountains, and her father had faced it with nothing more than a knife in one hand and a cudgel in the other. And he had slain the bear, killing it with a slash to the flank and a hard blow to the head.

The skull of the beast had hung over their hearth ever since.

Even through the tumult, Ilgra heard her father shout challenges at the dreadful dragon and curses too. With slithering quickness, Vêrmund turned to face him. Undaunted, her father darted past the worm’s plow-shaped chin and drove his spear at a gap between the scales on Vêrmund’s plated neck.

The blade missed, and a sound as of metal striking stone reached Ilgra from the valley floor.

Chills of mortal fear crawled along her limbs as Vêrmund uttered a thunderous chuckle, strong enough to shake the earth. The dragon’s amusement angered her, and she gnashed her teeth, outraged. How dare it laugh at their misery!

To the last a warrior, her father loosed a cry and ran between Vêrmund’s legs, where it was difficult for the dragon to reach.

But the creature reared back and filled the mighty bellows of his lungs, and Ilgra howled again as a torrent of blue-fringed fire engulfed her father.

Then the heaviness of despair crushed Ilgra’s heart, and tears welled from her eyes.

Her father’s sacrifice was not in vain, though. While he had distracted Vêrmund, her mother and sister fled the dragon, and by the blessing of Rahna the Huntress, Vêrmund showed no interest in following but concentrated instead upon their herds.

With all the clan dead or scattered, Vêrmund was free to feast at his leisure. Ilgra remained sitting on the ground, and she wept as she watched. Survivors joined her in ragged groups, their clothes scorched and torn, and some bearing fearsome wounds. Together, they huddled behind rock and ridge, silent as rabbits before a seeking snake.

Fires spread across the valley. Ranks of trees – gnarled old pines hundreds of feet tall – exploded in pillars of orange and yellow. The sound echoed among the peaks. Tails of twisting embers streamed skyward as the inferno climbed the flanks of the mountains. Billows of smoke fouled the air, and ash fell thick as snow until a false twilight blanketed the valley, a dark shroud of destruction heavy with grief, bitter with anger.

Vêrmund gorged himself upon their sheep and goats and pigs until his belly hung round and firm, pregnant with his gluttony. When he finally was sated, the dragon hove himself into the dismal sky.

He flew no great distance, though; whether because of his belly or because livestock yet remained to eat, Ilgra knew not. But the murderous old worm traveled no farther than the head of the valley. There he alighted upon the tallest mountain: high, snow-clad Kulkaras. He wrapped himself about its jagged peak, tucked his snout under his tail, and with a final, fiery sigh, he stirred no more.

Ilgra stared through the smoke toward his dark and distant bulk; a pestilential tumor mounted atop Kulkaras. As the cold constriction of hate tightened round her heart, Ilgra swore the most terrible oath she knew, for she had but one purpose now –

To kill Vêrmund the Grim. To kill the worm of Kulkaras.

Each of the three short stories feature an introductory illustration by Christopher Paolini. The Urgal horn below is featured ahead of The Worm of Kulkaras. 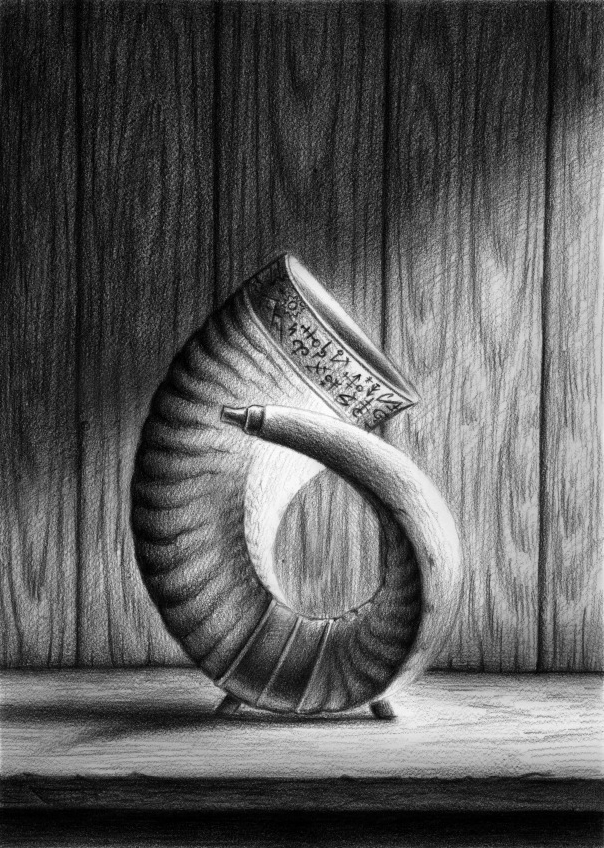