Let the first annual Alagaësia Hunger Games begin, and may the odds be ever in our favorite characters’ favor!

One of our favorite book series, The Hunger Games, saw its final film adaptation (Mockingjay, Part 2) hit screens today. To celebrate the occasion, we’re bringing the Hunger Games to Alagaësia – with our own spin on things!

A magical arena has been erected in the ruins of Vroengard Isle. This celebration will bring together some of Alagaësia’s mightiest heroes to compete in an arena-style battle. The celebration is meant to build morale in the post-Empire landscape, as families across the continent rebuild their lives after Galbatorix’s downfall.

Wards have been erected protecting participants from serious injury and death, and certain limitations have been placed on their magical powers. The Caretakers, Iduna and Nëya, have emerged from the confines of Du Weldenvarden to temporarily prevent participating dragons’ from flying and using any magic. Saphira, Thorn, and Firnen will have to rely on their size, cunning, and fire to survive the arena!

Alagaësia’s Hunger Games will have the potential to have two victors. If both members from the same team remain standing at the end of the Games, both are victorious!

To kick things off, we’re announcing our twelve participants and providing a briefing on each team’s strengths and weaknesses.

We want to hear from you! How do you envision the battles playing out? What tricks, traps, and obstacles do you think would challenge the arena participants? Let us know in the comments for a chance to win some goodies autographed by Christopher!

ERAGON AND SAPHIRA
Known as the saviors of Alagaësia, the pair must rely on their special bond and extensive knowledge from the challenges they faced together during their war with the Empire to emerge victorious!

Strengths: The pair have been through a lot worse than the arena. Months of travel, dozens of skirmishes and battles, and the knowledge and training of the Eldunarí make the pair formidable foes.

Weaknesses: Saphira has been temporarily barred from flying and using dragon magic. While she still has size and wisdom on her side, removing a dragon’s core abilities changes the playing field. Without the Eldunarí, Eragon’s magical powers are limited.


ANGELA AND SOLEMBUM
This mysterious pair have been traveling Alagaësia together for years. Their mutual respect for one another has created a bond matched by few. Angela and Solembum are not to be underestimated.

Strengths: Angela is powerful… too powerful, perhaps. No one knows the extent of her abilities, and that mystery leaves a lot up in the air. Though she’s agreed to not go over-the-top with her powers, and has left Tinkledeath behind, the herbalist remains a dangerous foe. Solembum’s ability to transform into a cat at will offers a number of opportunities for stealth and spying in the arena. Plus, the werecat can hold his own in physical combat.

Weaknesses: Angela reluctantly – and temporarily – parted with Tinkledeath and agreed to withhold use of some of her more… interesting and strangely powerful… abilities! Her cunning and wit remain intact. Don’t be quick to declare Angela and Solembum victors – these limitations and encounters with Alagaësia’s most powerful heroes will put their skills to the test.


MURTAGH AND THORN
Murtagh and Thorn remain largely a mystery to the inhabitants of Alagaësia. The once-friend of Eragon was whisked away to Urû’baen, where he bonded with Thorn and forcibly trained under Galbatorix. Since the tyrant’s death, the pair have traveled unknown lands north of Alagaësia hoping to come to terms with their drastically changed lives.

Strengths: Little is known of Murtagh and Thorn’s abilities to fight as a pair. While Eragon and Saphira encountered them several times, their largely unknown powers, cunning, and strength are not to be underestimated.

Weaknesses: While we don’t know the extent of their training under Galbatorix, we do know that it wasn’t the authentic experience Eragon received from Brom, Oromis, Glaedr, and the Eldunarí. As Rider and dragon, the pair remain immature, and that may work against them. Their emotional issues resulting from their torment and imprisonment by Galbatorix continue to plague them.


RORAN AND JEOD
One part scholar, one part hammer-wielding machine. Roran Stronghammer and Jeod Longshakes are an unlikely pairing, but one we shouldn’t underestimate. Roran’s time leading Carvahall and serving in the Varden’s army has provided him with invaluable experience in battle.

Strengths: This is an unusual pairing, but one we believe will be highly effective. Jeod, with his extensive knowledge of history, battles, and his experience behind-the-scenes in the two wars against the Empire, will be able to provide invaluable information, insights, and planning for Roran. As a proven leader and a proficient wielder of a hammer-of-death, Roran’s battle prowess paired with Jeod’s smarts make them a force to be reckoned with.

Weaknesses: Jeod’s lack of skill as a traditional warrior may leave the duo weak when it comes to one-on-one combat. Together, their inability to use magic may become problematic as they pair off against elven spellcasters and experienced Riders.


ARYA AND FÍRNEN
This powerful pair remain in training as dragon and Rider. Although Arya is a skilled magician in her own right, her powers have been drastically enhanced since bonding with Fírnen. The young dragon has much to learn, but the Eldunarí he and Arya have been studying under have prepared the dragon for what lies ahead.

Strengths: On her own, Arya isn’t someone you’d want to make an enemy of. Add a dragon into the mix and anyone opposing them ought to be running in the opposite direction. Arya has extensive experience in physical and magical combat, and her age and wisdom offer her an advantage.

Weaknesses: Fírnen’s young age, lack of experience in actual combat, and size difference compared to Saphira and Thorn puts the pair at a disadvantage.


NASUADA AND JÖRMUNDUR
As leader of the Varden and the Empire, Nasuada has vast experience as a commander. Her strategizing and cunning aided her in the many battles leading to Galbatorix’s downfall. After coming to respect Nasuada, Jörmundur, formerly Ajihad’s right-hand man, became a trusted confidant and leader in the rebel group’s Council of Elders.

Strengths: Their skill as strategic commanders will aid them as they compete against some of Alagaësia’s fiercest warriors. We can count on them to have detailed plans before attempting to get the jump on other participants!

Weaknesses: Neither participant are magic users, leaving them at a disadvantage against the arena’s Rider and elven participants. Additionally, as humans, their physical abilities do not match those of the other participants, perhaps with the exception of Angela, Solembum, and Jeod.


Plus, for the first time ever, you can get your hands on an epic new Hunger Games/Inheritance Cycle crossover t-shirt! The odds were never in Eragon and Saphira’s favor… 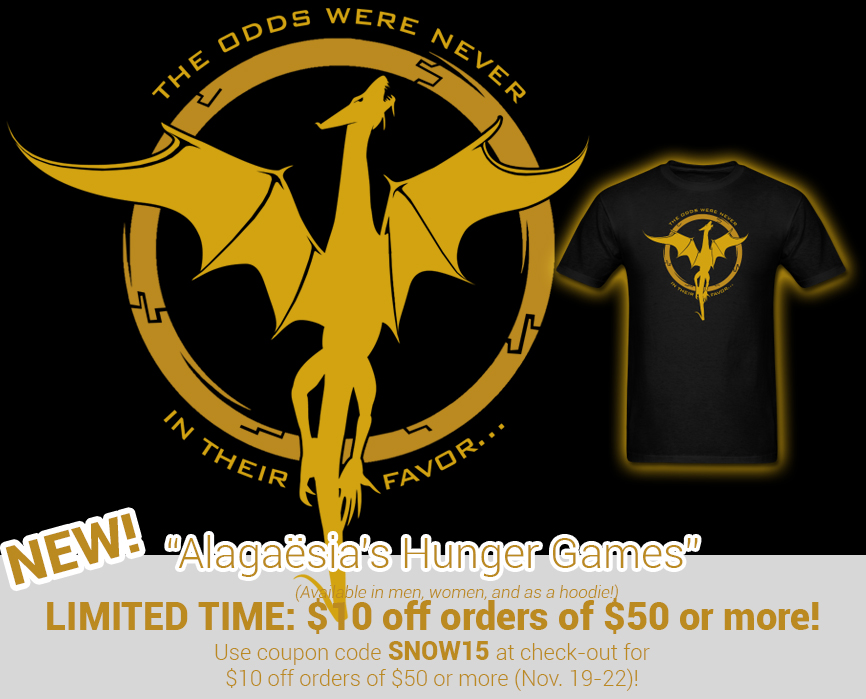 Now’s a great time to pick up a piece of Inheritance Cycle merchandise! We’re offering $10 off orders of $50 or more now through November 22nd! Shipping is cheap and there are a ton of designs you’ll wear in pride, including our Jurassic Park shirts with a dragon spin, Vroengard tourism shirts, dragon team shirts, and much more! Visit our store to see what you may be interested in!

Remember: We want to hear from you! How do you envision the battles playing out? What tricks, traps, and obstacles do you think would challenge the arena participants? Let us know in the comments for a chance to win some goodies autographed by Christopher!