Fans were devastated at the potential loss of a fan-favorite character, Murtagh, at the end of Eragon. Throughout the start of Eldest, it remained clear that the hero from Eragon was gone for good, joining the likes of Brom.

It wasn’t until later in the book that fans realized the exciting yet equally upsetting news: Murtagh was alive and now a Rider himself, but had been turned against Eragon and the Varden by the very man he despised: Galbatorix. With his own dragon and the true name enslavement by the most powerful villain in Alagaesia, Murtagh felt helpless, broken, and through that, driven to follow the commands given to him by his captor in order to save his, and his dragon’s, life.

We first re-encountered Murtagh on the battlefields of the Burning Plains. Eragon and Saphira met him and Thorn in aerial combat shortly after Morzan’s son struck Hrothgar, king of the dwarves, down, ending the run of another fan favorite character.

This piece of fan art, “Thorn versus Saphira” by artist “Ticcy” on DeviantArt, captures the moment in which Saphira, with Eragon atop her, and Thorn, ridden by Murtagh, meet in battle, clawing, biting, and doing anything they can to injure, without killing, the other. 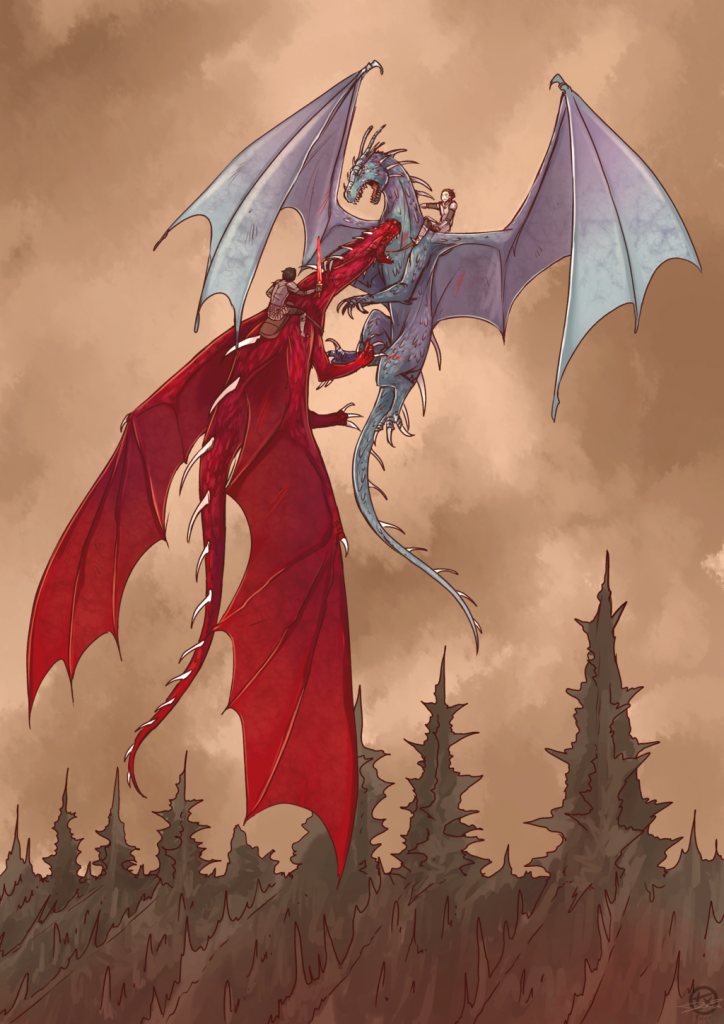 From the chapter in Eldest:

The siege on Eragon’s mind abated as Saphira and the red dragon crashed together, two incandescent meteors colliding head-on. They grappled, kicking each other’s bellies with their hind legs. Their talons produced hideous screeches as they grated against Saphira’s armor and the red dragon’s flat scales. The red dragon was smaller than Saphira, but thicker in his legs and shoulders. He managed to kick her off for a moment, then they closed again, each struggling to get their jaws around the other’s neck.

It was all Eragon could do to keep hold of Zar’roc as the dragons tumbled toward the ground, battering one another with terrible blows from their feet and tails. No more than fifty yards above the Burning Plains, Saphira and the red dragon disengaged, struggling to regain altitude. Once she halted her descent, Saphira reared her head, like a snake about to strike, and loosed a thick torrent of fire.

Now we ask: Did you see it coming – that Murtagh, son of Morzan, was not only alive but would join Eragon as a Dragon Rider? Did you sympathize with Murtagh or hold him in contempt for what he did both to Hrothgar and Eragon?