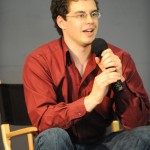 Inheritance has had quite the presence at this year’s Book Expo America! Christopher was featured in the Random House fall catalogue, offered signed posters to BEA attendees, and most importantly, held a public event at Apple SoHo where he conducted a moderated Q&A, read an exclusive excerpt from Book 4, and autographed books for fans.

We were on hand to cover every aspect of Christopher’s exclusive event and have brought back a summary on his never-before-revealed Book 4 facts, interesting questions and answers, as well as our thoughts on the second excerpt released from Inheritance! Keep reading for all of these exclusives and more.

Book Expo America – Today was the second day of Book Expo America and Christopher’s first on the show floor. The emerald green cover of Inheritance was featured on the back of Random House Children’s Books’ 2011 fall release catalogue, promoting the final addition to the beloved series in an epic way. 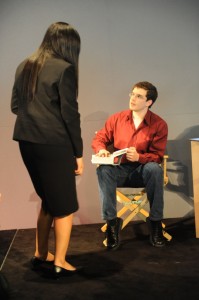 On top of that promotion, Christopher showed up at the Random House booth to sign BEA-exclusive posters for fans of the Cycle in attendance. The posters featured each of the book covers – including Palencar’s brilliant artwork – and enchanting gold embossed spines and print. The posters went quick, as the line for Christopher’s signing was insane. Fans are clearly clamoring for the final novel!

Apple SoHo event – Most exciting to die-hard Inheritance fans was Christopher’s open-to-the-public Apple SoHo event, where our favorite author hosted a moderated discussion with his editor, Michelle Frey, did a question and answer session with attending fans, and signed books.

Christopher’s moderated chat was extraordinarily interesting. The chemistry between Christopher and his long-time editor Michelle was evident from the start. Michelle, being the individual who works most closely with Christopher on the creation of Alagaesia, was extraordinarily knowlegable in all things Inheritance. The conversation was smooth and interesting, revealing an awesome amount of new facts about Book 4 and Inheritance in general.

We’ve compiled a list of the most interesting facts from the discussion: 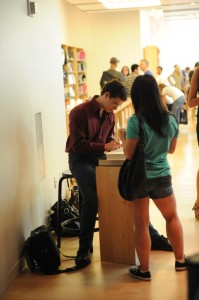 It’s difficult to summarize all of the fun, quirky, and amusing portions during the event. Christopher told the story of the time he was bit by a fan’s sugar-glider after having asked to pet it (and had been told, “They don’t bite!”). Christopher loves to tell the story as bragging rights – “I’ve been gnawed on by a marsupial!” Christopher also revealed that immediately after finishing everything Inheritance-related, he’ll begin to finish forging chainmail armor for himself to sit alongside his enormous sword and knife collection. On top of this, the author mentioned that should the time come for his sister to write a book, she’ll include Christopher as an arms dealer (a nod to his extensive sword collection, perhaps).

Christopher also presented fans with readings of the elven and dwarven languages from the book. The dwarf language is a “hoot” to hear as it requires the reader to go extraordinarily low, roll their Rs, and speak with a raspy voice. Christopher pulled it off well and fans enjoyed being able to hear the language as it was intended to be read. Soon after, Christopher told fans that he’d one day love to write a dwarven opera! 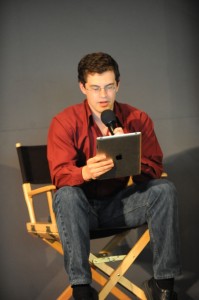 Fans in attendance were most excited to read an exclusive never-before-heard excerpt from Inheritance. The excerpt is the first few pages of Book 4, taken from the chapter “Into the Breach”. It was incredible to hear the words directly from Christopher’s mouth after a three year wait to read the book. The scene was chilling, revealing a possible death for a beloved character and instantly created a number of questions and theories in the minds of attending fans. Shur’tugal exclusively posted the entire chapter earlier today – check it out!

Overall the event was a brilliant start to what will end up being an incredible year for book fans. The event isn’t over – tomorrow Christopher will be honored with a Guinness Book of World Records award for best selling youngest author of all time! We’ll be there to cover the event for Shur’tugal.

Be sure to also check out our extensive coverage of the convention – nearly every fantasy, scifi, and horror author in attendance – on Lytherus.com!