This two part behind-the-scenes look at the creation of The Inheritance Almanac, starting with the founding of Shur’tugal and walking through the many inceptions of the book, will hopefully give fans a glimpse into the creation of one of the world’s largest fantasy-oriented fan sites and the process behind creating a 200+ page companion guide. Cycle fans looking to become authors themselves will also enjoy the story and perhaps find inspiration, ideas, and advice for their own personal journey. And so we begin…

I was a kid who, truth be told, loathed reading. I never enjoyed the books force-fed to me by teachers in middle school; I found them hard to relate to and rarely interesting. These negative experiences with books early on in life pushed me away from the understanding that reading is fun once you find the right books. It wasn’t until eighth grade that I discovered Harry Potter, and soon after, fell in love with reading (but still despised school-recommended books). A year later, in 2003, I discovered the Random House edition of Eragon… and the adventure truly began! 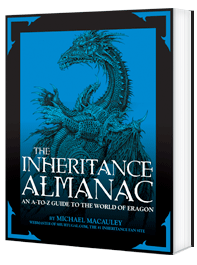 Fan sites have always been my passion. This started early for me; I recall my first fan site being a collection of custom items for early versions of the Sims video game. My first book-related fan site was for the novel Holes by Louis Sachar (and eventually included the movie, though I’m not sure anyone actually visited to notice the additions). I was actively involved in the Harry Potter fandom for several years, most of which was spent working on MuggleNet. It was through the Harry Potter community that I was able to attend the red carpet of the world premiere of Harry Potter and the Prisoner of Azkaban, help organize a book release party attended by over 15,000 fans, and truly got an understanding of how a proper fansite should function.

In December of 2003, I was introduced to Eragon by a friend from the Harry Potter community, Robby Kolinsky. Eragon was a book that had recently been picked up and published by Random House and carried quite the remarkable self-publishing tale. I was told that the author was fifteen when he started writing the book and that because I loved Harry Potter, I’d fall in love with Eragon. Not one to turn down a good fantasy read, I borrowed a copy from my friend and started the adventure that would shape the next six years of my life. If only I had known then what turning the first page would do!

Needless to say, I was instantly captivated. I fell for the book and its characters, and most importantly, the story of Eragon and his struggle as an “average Joe” thrust into an unanticipated adventure of trials and tribulations; the unlikely hero as a center piece to a truly enjoyable story. Many things set the book apart from others than I had read, and something inside of me told me that I wanted to start a fan site for this book. The series was going somewhere, I was sure of it!

And boy did it go somewhere…

Shur’tugal was met with instant success. I first launched the website as a basic news portal to keep up with the flow of publisher and movie news. However, as traffic and fan interest grew, so did demand for a larger website. I began working on content pages for the website during school and as soon as I’d get home, I’d set to work on the community side of the website. Shur’tugal quickly grew to house dozens of pages outlining and exploring various parts of the book — from a close look at the Ancient Language to an online memorial to Brom the Rider — and a rapidly growing community of equally-eager Inheritance fans.

It’s also important to mention that from the start, Random House (Christopher’s publisher) and the Paolini family were beyond supportive of Shur’tugal and the fandom as a whole. The Paolinis would send us a note any time there was news to share (or rumors to smack down), and Random House ensured that Shur’tugal was given access to Christopher and the books for interviews and book tour coverage. Their welcoming treatment and respect from the very start was pivotal to the early and long-term success of Shur’tugal. Without their support, there would be no Shur’tugal.

The site went through multiple phases and underwent dozens of changes over the six years that followed its initial release. Three books, six designs, one movie, four video games, and hundreds of millions of visits later and Shur’tugal is still kicking — stronger than ever, in fact. I’ve traveled the world on behalf of the fans, attending book tours, promotional events, dozens of conventions and conferences, movie premieres, press junkets, viral marketing campaign events, and more. All of this information was stored online and housed in my brain, waiting for the opportune moment to compile it and share it with the fans.

As mentioned above, I was able to learn a lot during my time working with MuggleNet and other Harry Potter sites. The book portion of the Harry Potter franchise was still going strong during my stay with the fan sites; Dumbledore had not yet died, no book had yet been spoiled for me (that ended quickly), and insane theories flew wild day after day. Dozens of authors had popped up to join in the madness surrounding JK Rowling’s books, all hoping to compile information and explore the Harry Potter mysteries in their own companion guides. Many were met with success, such as Galadriel Waters, author of several unofficial Harry Potter fan companion guides. Working with these authors had planted the desire to create my own companion guide within me… a “want” that never left me.

At some point during my very boring days in high school, I came to the conclusion that I would write a companion guide for the Inheritance cycle (then still a trilogy). Would it ever be published? Very unlikely. Would it still be fun to write? Of course. If worse comes to worse, I thought, I’ll just self-publish the book online as a free guide for fans. I began planning.

My initial vision for what would become The Inheritance Almanac was very different from what made it to my publisher. Looking through my hundreds of pages of notes, the thousands of marks, highlights, underlines, and post-it notes found 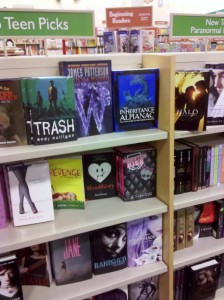 within my “work copies” of the Inheritance books, brings back many amusing memories of these early plans. The first book was to be comprised of an “almanac”, similar to what you see within the published book; a list of people, places, and things, with brief descriptions of each. Rather than the way our current Almanac is done, the initial almanac would be limited to one line descriptions of each person, place, and thing in Alagaesia. I also thought I should write detailed summaries of every chapter of the then-currently published books. I would also contribute my personal favorite theories and a random interview with Christopher Paolini.

The book began to take shape during the school days of my boring high school experience. I worked throughout math class and during Computer Science labs. I read, re-read, and re-read again. Each read through would net hundreds of new notes and highlights; post-it notes soon plastered the pages of my very worn copy of Eragon. Outlines were drawn up for the over-all book, and from that, sub-outlines branched out, detailing each unique section of the fan guide. From here I began pulling, moving, and manipulating my notes to create the framework for many of the almanac entries, chapter summaries, and then-relevant theories.The first portion of the book to take form were the chapter summaries, which pulled together fairly easily due to the fact that I had memorized large chunks of Eragon and had my endless pages of notes and highlights at my disposal. This section was first completed and though it shall never see the light of day, still humbles me to know that I pulled off something so cool (and arguably useless).

I wish I could tell you that I immediately realized the failures of my original plans. I didn’t. I spent months working on the book that would never see the light of day, slaving over pages and pages of notes, edits, highlights, and post-its. I was naive then, but had fun working. Though this information never made it further than a now-forgotten folder on my computer, it did help me in a lot of ways. I learned how to properly analyze the books; to find information that other fans had missed or forgotten; to appreciate the books more than I had previously; to memorize parts of the books because I had read them that many times. Most importantly, it gave me the courage to realize that the direction I had been headed in was not the direction I wanted an actual book to take… and that was the most important step in this process.

End of part one! Part two will tackle the process that converted the above guide into The Inheritance Almanac, the road to publication and the rocks along the way, as well as how the final book truly came to be. Plus we’ll thank everyone involved, offer some advice to aspiring authors, and more. Stay tuned!

Learn more about The Inheritance Almanac — including a sneak peek at the book’s contents, ordering information, and more — by visiting Shurtugal.com/Almanac!