After finishing Inheritance, Christopher set his sights on an entirely new universe: our own! His next project has been announced as a sci-fi novel, which he remains hard at work on. The book has been in the works for over two years.

With a year of planning and months more of writing, Christopher was finally ready to open up about the unnamed book:

“I messed around with a number of short stories, each in a different style. I even tried my hand at a screenplay (they’re harder than they look). And I read as many books and watched as many movies as I could.

Once I had recharged my creative batteries, I knew I was ready to tackle something bigger. Much bigger. So I began researching the information I’d need. For nine to ten months, I scoured the Internet for details obvious and obscure. I called and emailed professors around the world. I spent days hashing over various world-building issues with my friends and family. All so that I could do justice to the setting I had decided on for my next story.

And then, only then, did I start to write.

So far, it’s been a blast. The story is science fiction—one of my first loves, along with fantasy—and full of aliens, spaceships, lasers, strange new planets, and explosions. You know, fun stuff. At the same time, I’m hoping that the story will stir people’s emotions, as well as give them a few interesting things to think about. As with all creative endeavors, there’s no guarantee of success. But I think it’s going to end up being pretty awesome.”

Christopher dropped his first major hint at the setting of his book: 61 Cygni A. With nothing else to go on, we started digging… and found some interesting information:

61 Cygni A is one of two stars that make up the 61 Cygni binary star system (a star system with two stars orbiting each other). 61 Cygni is located “relatively” close to Earth – just 11.4 light years away. Look up into the night sky and you may barely be able to make out these stars with the naked eye – they are among the least conspicuous visible stars.

Throughout the twentieth century, astronomers reported sighting a massive planet orbiting one of the system’s two stars. The object was said to have a mass eight times the size of Jupiter, taking 4.8 years to orbit 61 Cygni A. Scientists later speculated that the system included two giant planets (six and twelve Jupiter masses) orbiting 61 Cygni A and one giant planet (seven Jupiter masses) orbiting 61 Cygni B. However, modern technology has found no planets within this solar system. This could mean absolutely nothing… but it could also make for a fun story. A massive planet is there in the 20th century and later completely disappears?

We don’t learn any ground-breaking details from this 61 Cygni hint, but it does reveal that the book will take place in our universe – likely in an imagined future. If you’re interested in learning more, you can read our entire article on 61 Cygni A.

Comments and Tidbits in Interviews

@SamuelTolbert: Any news on the sci-fi novel you are working on? Even hints?
Christopher: “’Twas brillig, and the slithy toves/Did gyre and gimble in the wabe;”

@NolanHolley: Where on the scale in terms of “hard” sci-fi is your current project?
Christopher: 8.5 on the hardness scale, where 1 is DRAGONS IN SPACE! And 10 is a physics textbook. #ihope #fingerscrossed

@Jamaha3: What’s the first word of your new book?
Christopher: “the” … but it’s subject to change.

@Mattrosenberg: What POV will your next book be in?
Christopher: Limited third person. 😀

Christopher has been very open about his progress writing the book, regularly sharing photos of chapters as they’re finished. We’ve compiled a gallery of these photos: 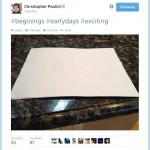 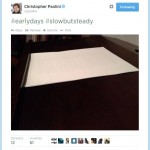 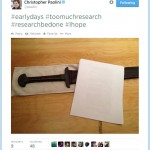 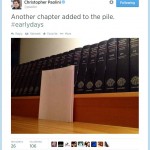 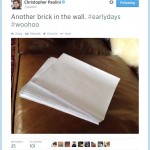 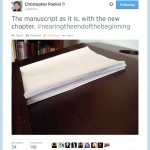 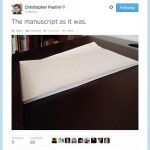 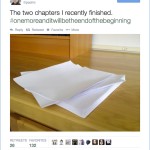 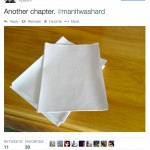 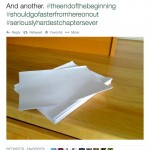 No announcements have been made regarding a release date for the novel, nor has Christopher addressed whether we’ll see any of the short stories mentioned above. With the author currently powering through chapters of the sci-fi book, it may not be long before we hear more news regarding a title, synopsis, cover, or release date!