Reading through a book series is one thing, but seeing it brought to life is an entirely different experience. Hundreds, if not thousands, of pieces of Alagaësia-inspired artwork have made their way onto the internet over the past decade, all of which shed light on the series in unique ways. We’ve begun to collect many
Read More
Artists and fan artists alike are renowned for their ability to bring the heart and emotion conveyed in text to life through illustrations, as is the case with the following piece of story-driven fan art we’re introducing today. In this piece based on a scene from Brisingr, Arya comforts Eragon before he rides off to battle
Read More
It’s rare for one artist to bring all of the Inheritance Cycle’s main characters to life in a stunning and unique way. Hundreds of talented fan artists choose to focus on one or several characters to capture a moment, mood, or idea in an illustration. The series’ official illustrators, including John Jude Palencar, have focused
Read More
Grimrr Halfpaw — “King of the Werecats, Lord of the Lonely Places, Ruler of the Night Reaches and He Who Walks Alone” — was first introduced to readers in Inheritance. His character is as mysterious as readers have come to expect from the elusive race of werecats, offering up little information about himself other than
Read More
Fan art and fan fiction are where some of the most interesting off-the-page stories are born, as is the case with a magnificent piece of art we’re about to show you. Some artists let their imaginations run wild, dreaming up scenes and scenarios which take place in the pages an author chose not to share
Read More

Now a resting ground for hundreds of deceased dragons and Riders, Vroengard Island and its capital, Doru Araeba were referenced and discussed throughout the entirety of the series. What once once represented the Riders’ strength and their status as a beacon of hope and prosperity was reduced to rubble in a single battle. For years, the
Read More 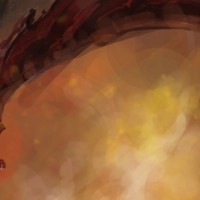 Murtagh is perhaps the most conflicted and polarizing character in the Inheritance Cycle. For many, Murtagh represents oppression, struggle, and even a little bit of evil. He has always been a fan favorite, and his disappearance at the end of Eragon was devastating for the Inheritance community. His reappearance at the Battle of the Burning
Read More
In a small town such as Carvahall, one’s lot in life can quite often be determined by the family they are born into. Albriech and Baldor were sons of Horst the blacksmith, Katrina the daughter of the butcher Sloan, and Roran (and, to some extent, Eragon) was raised as the son of a farmer. These
Read More
Every true fantasy hero (and villain) needs a good weapon.  Whether in a large scale battle or a duel of champions, a warrior’s chosen weapon can mean life or death.  Not only used for fighting, they can also be symbols of great power, hope and despair.  Fortunately for fans of the Inheritance Cycle, the series
Read More
Let’s face it: we’ve all daydreamed about owning our own dragon. The scene in Eragon in which Eragon discovers Saphira’s dragon egg has caused many of us to long to find our own dragon egg. Thanks to an incredible and easy dragon egg art project, you can now create your own! You choose the size
Read More