Relationships in the Inheritance Cycle – Which worked and what will unfold in future stories?

The Inheritance Cycle is a coming-of-age story filled with fleeting love, will they/won’t they moments, and broken hearts, leaving fans simultaneously swooning and crying. Since the series’ conclusion in 2011, Christopher has revealed a wealth of new information (highlighted in red) about the motives behind many of our favorite couples, their lives after the defeat of Galbatorix, potential futures for unlikely pairs, and more!

You’ll notice a glaringly obvious omission: Eragon and Arya. In this article, we want to explore the relationships that did work, in one way or another! 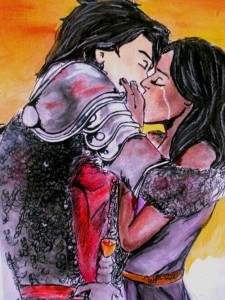 Murtagh and Nasuada’s “relationship” began at the end of Eragon during Murtagh’s imprisonment by the Varden, who were concerned that Murtagh was a spy sent by Galbatorix. Nasuada would visit Murtagh during his captivity, bringing her unlikely friend books and sharing stories.

Following the Battle of Farthen Dur, Murtagh’s forced life as Galbatorix’s pawn and Nasuada’s ascension to leader of the Varden all but eliminated any hope for a relationship between the pair. Keep in mind, even if the two encountered one another, it was then believed that Murtagh was serving the wicked king voluntarily.

Later in the series, Nasuada was taken captive by Galbatorix, held against her will and tortured in the most vile ways. It was during this time that Murtagh turned the tables, visiting the Varden leader as she did for him during his imprisonment. Their reunion offered the pair a second chance to bond and an opportunity for Murtagh to redeem himself in the eyes of the woman he (presumably) loves.

In a touching exchange between the pair, Nasuada asked why Murtagh would want to help her – “Why?”. He cryptically responded “You know why,” heavily implying his assistance came from a place of love.

When asked if we’ll find out more about Murtagh and Nasuada’s future in books to come, Christopher Paolini said yes. [source] Given the chemistry between the pair, it’s a safe bet (although not confirmed) that we’ll see more positive development in the duo’s unlikely relationship. After Murtagh’s soul-searching, perhaps he’ll turn to to Nasuada for help assimilating back into a life of freedom and wholesomeness.

There’s hope for Murtagh/Nasuada yet! 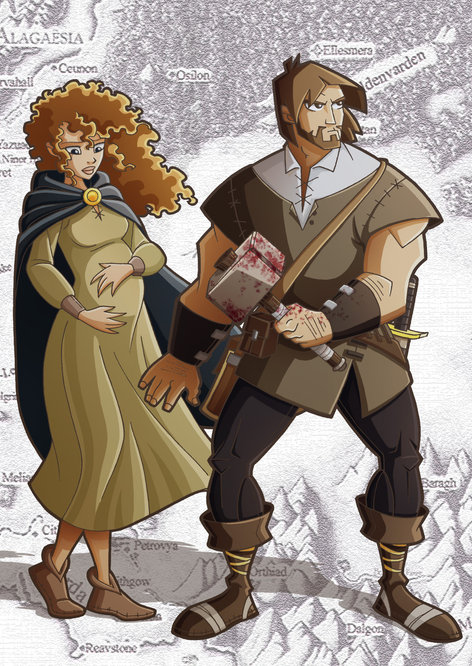 Theirs may be the only truly successful love story in the Inheritance Cycle: a couple ripped apart by betrayal (Sloan and the Ra’zac), only to reunite when one rescued the other from her wicked captors. Their love saw Roran lead his people across half a continent out of sheer determination to rescue his true love.

Roran and Katrina first met and fell in love in Carvahall. Realizing that Katrina could be used as a pawn against Roran, and by extension, Eragon, the Ra’zac kidnapped her (and her father, Sloan) after a failed attempt to capture her boyfriend. She was eventually rescued from Helgrind by Eragon, Saphira, and Roran, returning to live among the roaming Varden army. The lengths Roran went to to rescue his wife-to-be was the ultimate revelation of his passion and dedication to the woman he loved.

Some time after their reunion, it was revealed that Katrina was pregnant with the pair’s first child. In a memorable moment of love in happiness in an otherwise grim time of war, the pair wed among their friends and family, with help from Arya, Nasuada, and Eragon, who each contribute wedding gifts and trinkets to make the ceremony possible.

The pair brought one of the first humans to be a part of Alagaësia’s post-Galbatorix era with the birth of their daughter, Ismira. After the fall of Galbatorix and his Empire, Roran and Katrina returned to Palancar Valley to resume the once-simple life they longed for once more. According to Christopher, Roran is was made Lord of Palancar Valley upon his return and will play a key role in the land’s recovery and rebuilding. 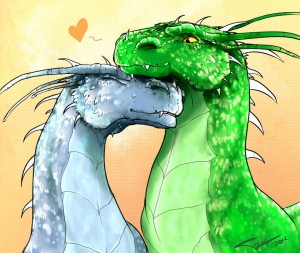 You may be surprised to learn that Saphira and Fírnen’s moments together at the end of Inheritance weren’t a sign of love, but rather an effort between two of the last members of a once-dying race identifying each other as “good mating stock” – worthy parents for Alagaësia’s newest dragons.

That’s not what dragons do. She has a lifelong partner. That’s Eragon. What she’s looking for is a father for her children. And she’s not even looking for a stay-at-home father, either. Or a father whose going to stick around. She’s looking for, you know, good mating stock. And also, there’s not a lot of time available to either her or Fírnen. [source]

Riders’ dragons would tend to mate a lot longer and for longer periods than the wild dragons. And there I think you would see bonded dragons pairing up and probably staying together for years at a time. Maybe decades at a time. Maybe longer. But I think the dragons have a different attitude toward all this and part of that is just their biology. They mate and that’s sort of a rather ferocious event, and it’s something that they may do more than one time. But that’s not really something that they really link to the relationships they have outside of the mating. So I could see a female dragon who might very well mate with a male dragon that she wouldn’t necessarily want hanging around afterward… just because she thinks he’s got big wings and bright scales, and he’d make a good biological father for the children. [source]

So there we have it. There’s likely no budding romance between Saphira and Fírnen, though a friendship is likely given their mutual respect for each other and the potential future romance between their Riders. 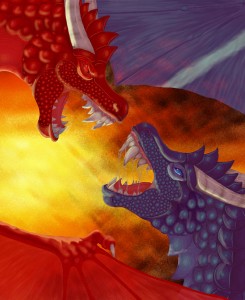 It’s a relationship that never actually happened, but it’s one that Christopher says would have gone over well had circumstances (Murtagh’s “thorny” situation) been different:

Saphira would have gone after Thorn with just as much eagerness if Thorn hadn’t been in the situation he was. Saphira and Thorn probably would have gotten along like a house on fire, so to speak. Romantically at least, if the circumstances had been different. Although that probably would have been a little weird for Murtagh and Eragon. [source]

Would it be fair to refer to this missed opportunity as a “relationship”? Maybe. Given Christopher’s revelation about dragons’ lack of desire to mate for life, it’s hard to say definitively that they’d have become a “couple”. However, there is hope that it could have worked out, had circumstances been different, given this quote from the author: “[Y]ou would see bonded dragons pairing up and probably staying together for years at a time. Maybe decades at a time. Maybe longer.”

Could Murtagh and Thorn redeem themselves in a future novel, leading to a potential relationship between the unlikely pair? Time will tell! (Our guess: probably not.) 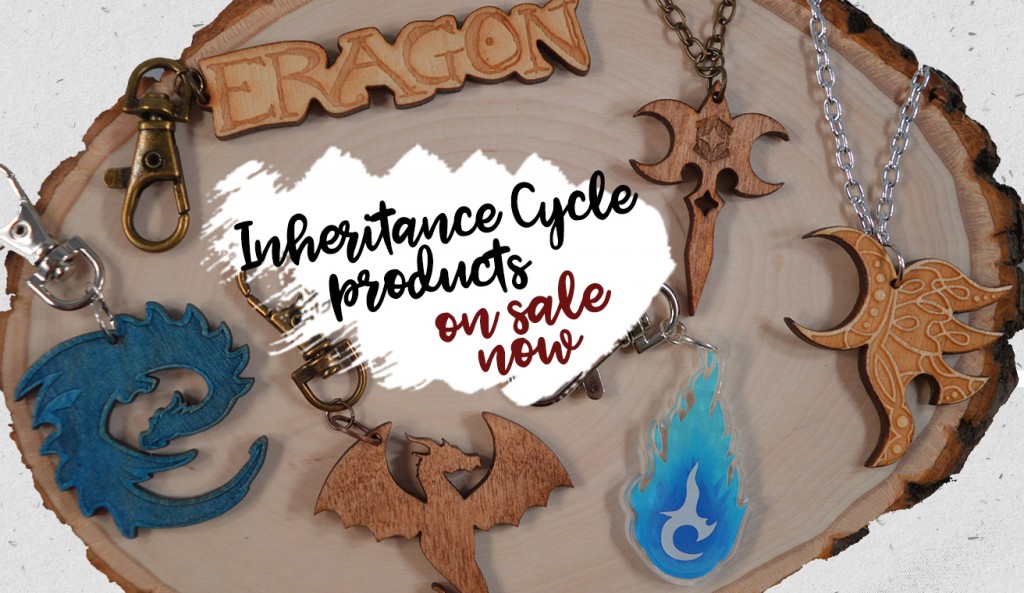 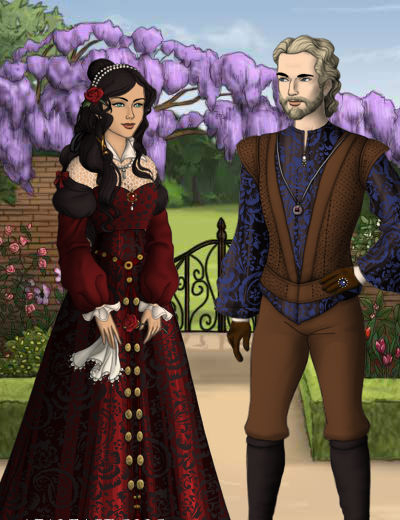 This unlikely love story is the reason we have the Inheritance Cycle.

A feared assassin and wife of one of the land’s most powerful and vile inhabitants befriends and falls in love with a leader of the resistance that seeks to topple her employer’s empire and end the life of her beloved. Let that all sink in. It’s a wonder their relationship made it as far as it did, given the unfortunate circumstances working against them at every turn. While short lived, their story was one of true love with a tragic ending.

Selena, sister of Garrow and mother of Eragon and Murtagh, grew up in Carvahall, where she would eventually meet Morzan, a member of Galbatorix’s Forsworn. The young woman was taken by the Rider’s charm and opted to accompany him on his travels across Alagaësia. Selena’s love for Morzan continued to grow – something the Rider took advantage of, twisting her loyalty and passion into a weapon, creating the Black Hand, Alagaësia’s most feared assassin. Her transformation from a young, innocent woman into a powerful tool working against Morzan’s enemies was swift.

During this time, Selena became pregnant with the couple’s first and only child: Murtagh. The newborn never had a shot at a normal life with his mother, as he was immediately whisked away to be raised by a nurse and used as a pawn to ensure Selena’s continued loyalty.

But Selena never forgot her child or forgave her husband’s cruelty. Morzan’s decision to force mother and son apart drove a wedge into their relationship, steering her right into the arms of his enemy: Brom.

Their love affair was short but fleeting. Brom met Selena while disguised as a gardener within Morzan’s estate, bent on vengeance after the evil Rider killed his young dragon. The pair quickly fell in love, helping bring Selena back to the “light” – so much so that her true name changed, allowing her freedom from her husband’s stranglehold. When Brom revealed his true identity – a Rider and spy for the Varden – Selena began providing him with information for the resistance movement.

At some point during their affair, Selena became pregnant with her second child… fathered by Brom. She used her final mission on behalf of Morzan to sneak away to Carvahall, where she hid in the Carvahall home of her brother Garrow, eventually giving birth to her second son. She named the child Eragon and departed Carvahall soon after, leaving the newborn in the care of her brother.

Brom and Selena would never reunite after their final encounter three months into Selena’s pregnancy. After her return to Morzan’s castle, the once-assassin fell gravely ill and died shortly before Brom was able to return to see his beloved.

Their relationship ultimately led to Selena’s redemption from the life she led as the Black Hand. Her love for Brom was strong, revealing out the woman she was meant to be, and helping to bring to life the “savior” of Alagaësia: Eragon.

Christopher recently revealed that had circumstances been right, Brom would have taken Murtagh in and raised him as his own. “It wouldn’t have been easy for him,” Christopher said.

Which romance was your favorite in the series? Which has the most potential? Let us know in the comments!

Fan fiction writer, fan artist, or roleplayer? We want to hear from you for Paolini.net articles!

Meet Daras Guildward, son of the Lord of Fellworth Manor, in this deleted scene from ‘Inheritance’

Meet Daras Guildward, son of the Lord of Fellworth Manor, in this deleted scene from 'Inheritance'

Enter to win an Inheritance Cycle art poster from the Shur'tugal Shop!