Home
/
Fans
/
Fan Art
/
Create your own dragon egg with this quick and inexpensive DIY project!

Let’s face it: we’ve all daydreamed about owning our own dragon. The scene in which Eragon finds Saphira’s egg inspired many of us to long for our own dragon egg discovery adventure.

The below images and their captions will outline all of the supplies you will need for the project in addition to each step you’ll want to follow as you bring your dragon egg to life! You can find all of the required crafting items at a local craft store such as Michael’s or Jo-Ann Fabrics: 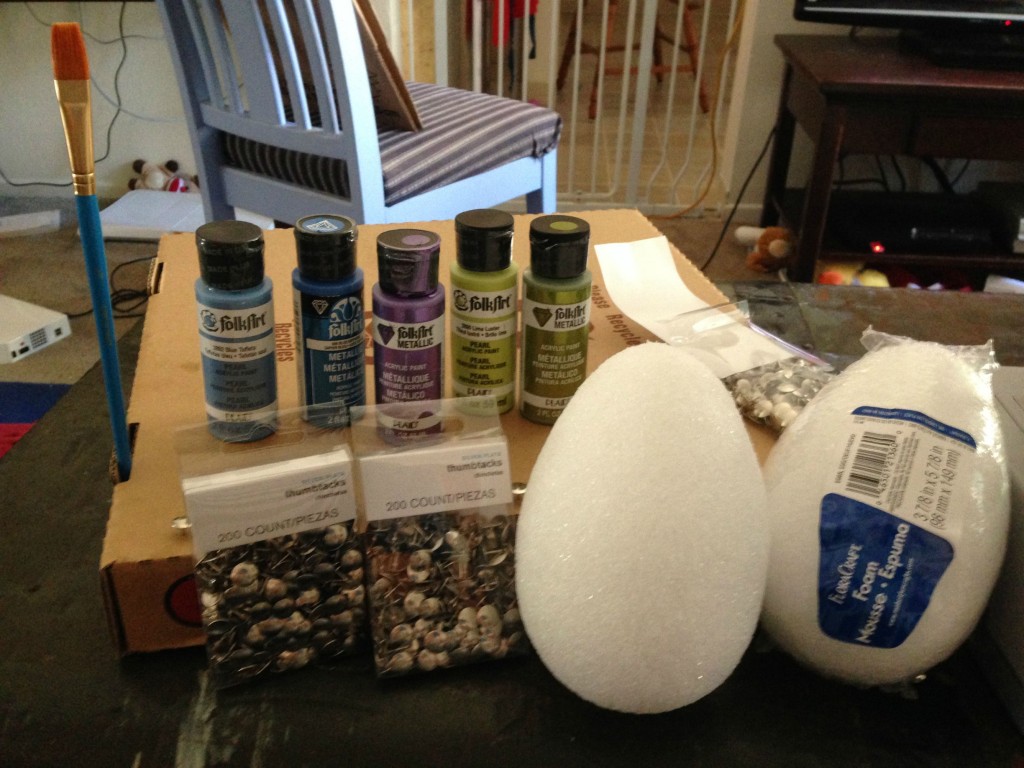 You’ll need: One foam egg (found at your local craft supplies store), at least four packs of regular thumbtacks (roughly 800 thumbtacks), different colors of acrylic paints (your choice – metallic paints will give your egg more of a shine), one final paint color to dry brush over the finished egg (more on that in the instructions below) and a paintbrush. Optional: You may want to use Mod Podge to seal the egg once finished and a pizza box (or any other box) comes in handy to stick the thumbtacks into while you paint them.

Getting started is as easy as unwrapping your supplies, setting up a work station, and placing your first batch of thumbtacks into the box you’ve found! We’ve put together a step-by-step photo series with captions explaining exactly what you’ll need to do in each process.

Note: Something we didn’t do that you may want to consider doing – paint your styrofoam egg your base color (in our case, dark green) so that any part of the egg that peeks through the tacks won’t stand out. You don’t have to get the styrofoam painted perfectly, just enough to look green. 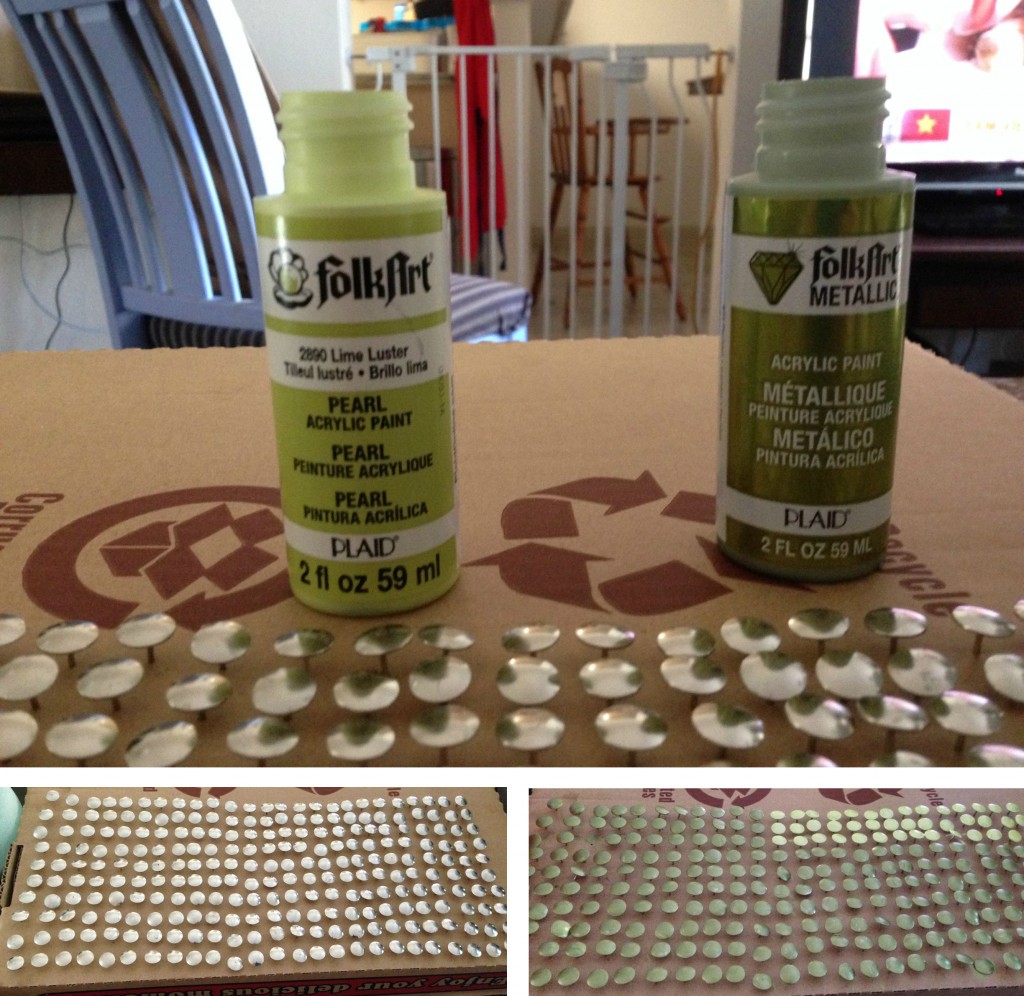 Once you’ve placed the first batch of thumbtacks into the box you’re using, you’ll be able to begin the painting process. If you are looking to have a bit of a color variation to your egg (which adds a bit of depth and realism), you’ll want to be sure to paint some of your eggs a lighter shade. In this example, a majority of the thumbtacks are a darker metallic green, whereas a few thumbtacks were painted with a pearlescent lime color to add a bit of variety to the scales on the egg. 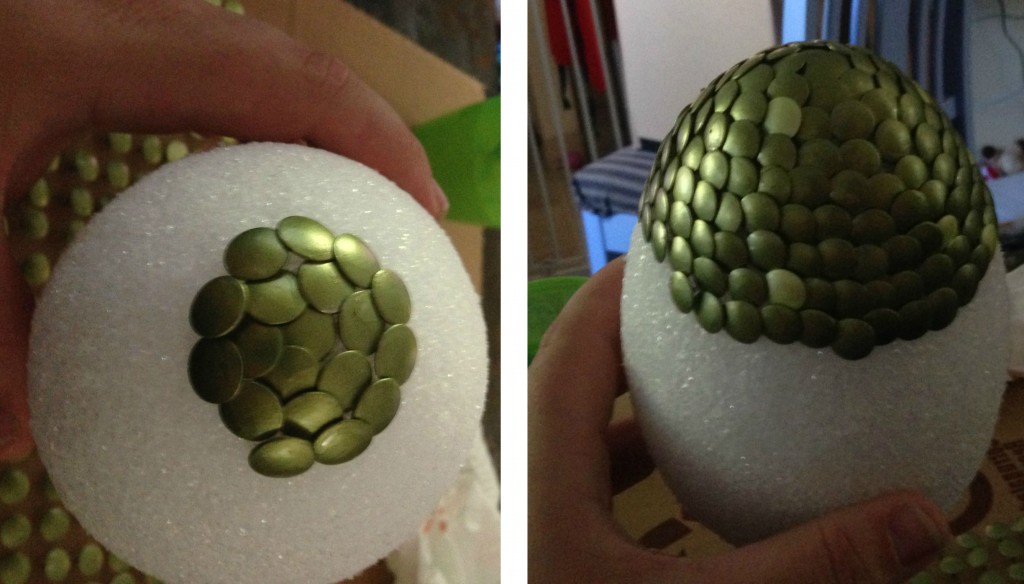 It’s time to start placing the “scales” into the egg! You’ll want to start with the first tack at the very center of the top of the egg. From there, you’ll start placing the scales overlapping each other in a spiral pattern. The photo on the left shows the start of that spiral pattern, which ensures that all of the scales are able to be overlapping as you continue to add to the egg. The photo on the right shows the egg as it progresses with more scales added.

You’ll need to go through multiple rounds of thumbtack painting in order to cover the entire egg. Depending on how many color variations you want in your egg, you’ll likely only need to paint the lighter color onto the thumbtacks in the first batch. The rest of the batches can be painted with your darker color. Continue placing the scales into the egg with your spiral pattern process from above. 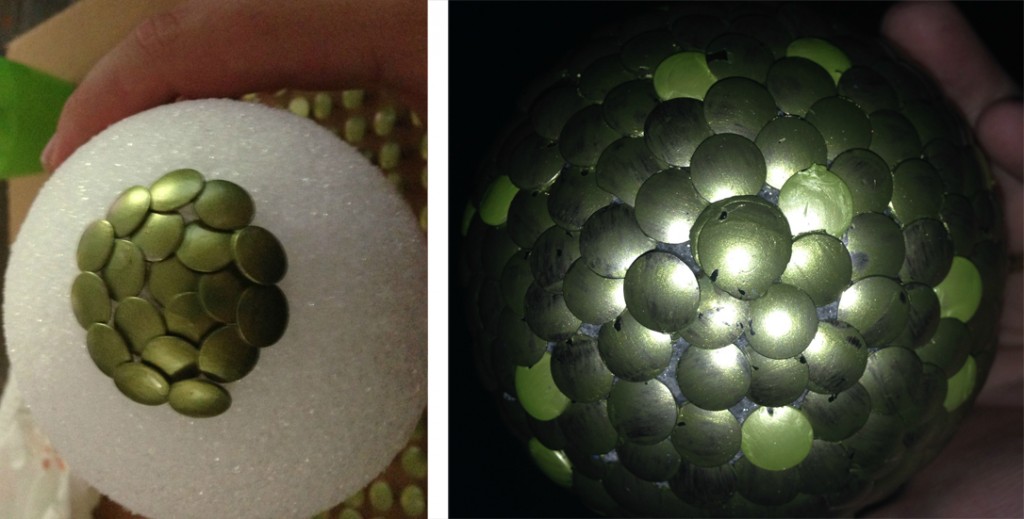 The left photo shows the first scales being placed, and the photo on the right shows the bottom of the egg after the final scales were placed! To prevent the styrofoam egg bottom from showing through the small gaps in the scales at the bottom, you may want to apply some paint before placing those final scales. In total, 625 olive scales and 5-10 lime scales were used to cover the entire egg.

The hardest part of creating your dragon egg art will be waiting for the thumbtacks to dry. After you’ve followed the above steps, you’ll have a completed (and fairly heavy!) dragon egg. It’s unbelievable how realistic these dragon eggs can look, especially when you vary the scale colors for “accents”. Metallic paints give the dragon egg the same glimmer you’d expect to see from the dragon eggs found across Alagaesia.

If green isn’t the dragon egg color of your choice (Firnen would be sad!), there are many more options. In the below photos, you can see just how interesting metallic blue, purple, and teal scales can look while combined into one egg! Fooling with more colors, such as a reds and maroons, grey and black, gold, and more can result in even more unique dragon eggs! 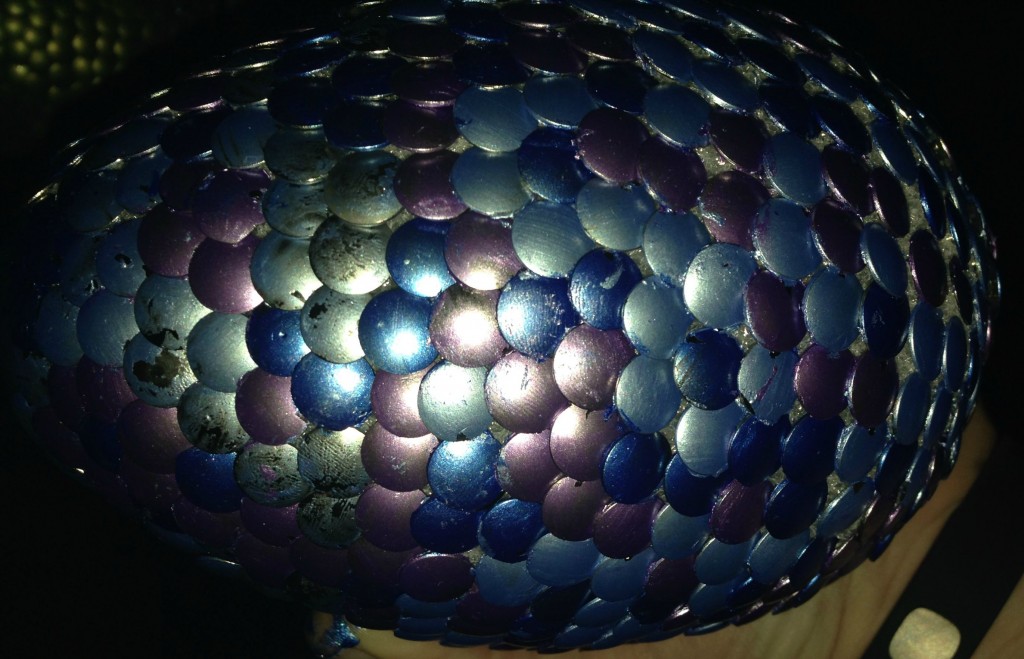 This is another color variation you can utilize to make your egg! You will notice that many more paint colors were used in order to create a substantial amount of variety amongst the scales. This is entirely up to you! 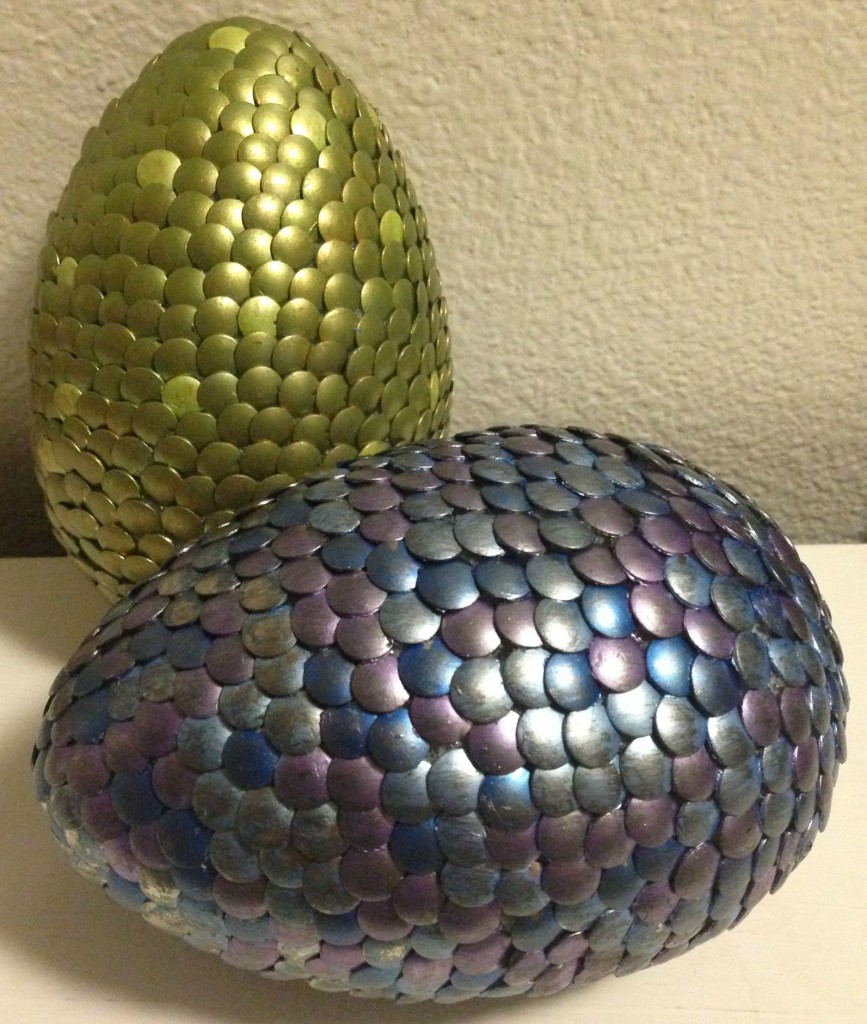 Once the scales were finished being placed, a final coat of paint was applied to the eggs to give it the sheen seen in the photos. This is entirely optional but will help the eggs shine more vibrantly. An antique gold color paint was dry-brushed onto the green egg. A gunmetal metallic paint was dry-brushed onto the multi-colored egg. Once the paint has fully dried, you may want to consider sealing your egg with a good coat of Mod Podge (not pictured in the above photos).

Editor’s note: This post was originally published in 2014 and has been updated and re-released!