On the Crags for Arya and Fírnen’s “First Flight,” and new information on their training

We knew of the existence of a green egg since first reading Eragon, but it wasn’t until Brisingr, when we still hadn’t seen the “Green Rider,” that we began to wonder when we would see it hatch, who it would hatch for, and what side they would be on. The release of the official cover of Inheritance was revealed in March of 2011, refueling fan excitement and speculation.We couldn’t be quite sure who would join the exclusive list of remaining Riders in Alagaësia, but the community certainly had its theories:

Why did he ultimately shy away from choosing Elva as the Green Rider? Christopher explained in a recent interview:

Elva was originally considered for the role of “Green Rider” before you chose Arya instead. Is it possible Elva could become a Rider in the future?

Christopher: Possible, yes. However, I think that it would end up making her over-powered. She already has an amazing ability; being a Rider as well seems like overkill to me. If she were, though, she’d be pretty scary. Even Galbatorix wouldn’t have stood a chance against her.

As it would turn out, Arya would be tapped as the next Rider to take flight in the Cycle when the male egg hatched for her in Ellesméra. She thus raised the young dragon Fírnen in Tel’naeír where Oromis and Glaedr once trained, a holy ground for Dragon and Rider.

We can all remember the hasty and difficult process that Eragon went through when raising and bonding with Saphira. He was relatively uneducated and inexperienced when it came to anything dragon-related, and at one point was literally flying by the seat of his pants when training with the blue dragon whelp. Arya, however, was born of a culture that knew the history and biology of the race of dragons. She also got to witness many of Eragon’s first battles and adventures with Saphira. Even Murtagh had magical control over his dragon through the influence of Galbatorix, though that at times was far from an advantage.

Fans were left wondering how Arya and Fírnen would properly train as dragon and Rider after the question was left unanswered in Inheritance. Christopher included a new addition to Inheritance in the Deluxe Edition which clarified that several of the Eldunarí stayed behind in Du Weldenvarden after Eragon and the others left. These Eldunarí helped to train Arya and Fírnen.

Christopher also commented on their learning and growing as a pair:

First of all, I think Arya knows a lot of the stuff that she would need to know as a Rider anyway. She grew up in Ellesméra, she knew Oromis, and she knows a lot of the things already that Eragon had to learn from scratch. She’s not starting from ground zero.

Also, I think Fírnen got a lot of information on how to be a proper dragon from Saphira in their time together, even though it was very brief.

Below is a piece of beautiful work by fan art maestro Ticcy, entitled “First Flight,” which celebrates the early bond the two share. In this image we see Arya astride Fírnen in the Crags of Tel’naeir, about to take to the skies on their inaugural flight together. 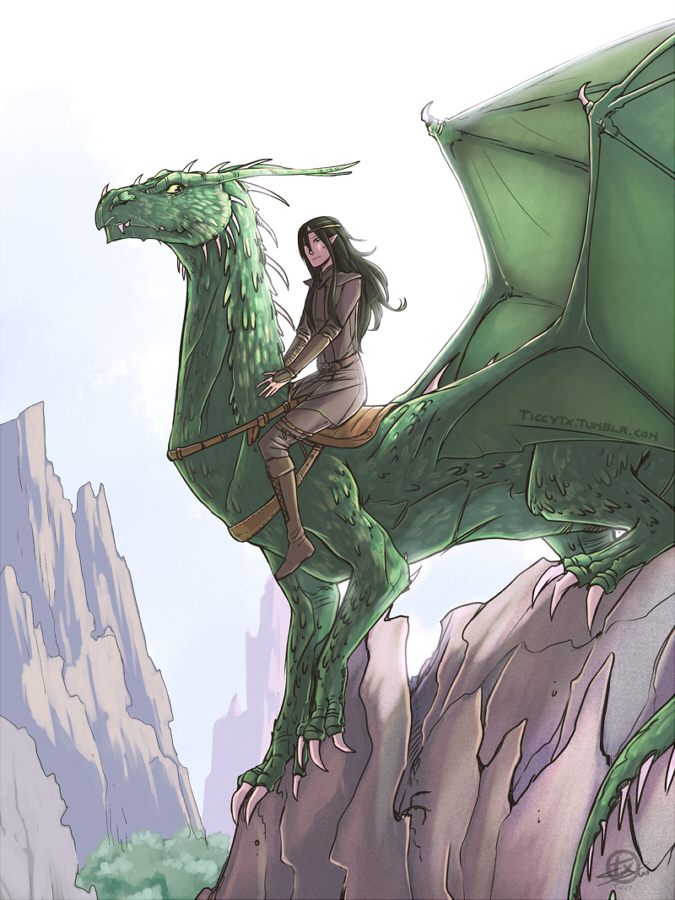 From the chapter “Fírnen” in Inheritance, Arya shares her first moments with her dragon:

“The bond is everything I imagined it to be. When we touched…I always wanted to be a Dragon Rider, Eragon, so that I could protect my people and avenge my father’s death at the hand of Galbatorix and the Forsworn, but until I saw the first crack appear in Fírnen’s egg, I never allowed myself to believe that it might actually come to pass.”

Now we ask: Do you think Arya had the same troubles raising and flying with Fírnen that Eragon had with Saphira, or did she have a leg up on Eragon? What do you think the first flights of this Rider and her dragon were like? Let us know in the comments!

Better than the movie: Patrick Doyle’s Eragon soundtrack is epic!