The Eragon Coloring Book, OUT NOW, is a stunning interpretation of Alagaësia

by Mike Macauley
in Coloring Book
0 0
70

The Official Eragon Coloring Book hits store shelves today! We’ve released a number of articles detailing its contents, how it came together, and even showing off some of the book’s art, and today we’re excited to celebrate its release! We have two autographed copies up for a grabs at the bottom of this post!

Don’t forget that Christopher Paolini is headed on an 8 city book tour beginning today! Check our tour stop page to see if he’ll be nearby!

Fans are being encouraged to take photos of what they’ve colored and share it using the hashtag #ColorEragon on Twitter and Instagram! We’ll be featuring many contributions, including our favorites, here on Shur’tugal, as well as on the Paolini family website, Paolini.net! The feed will be permanently displayed on our Eragon Coloring Book page. 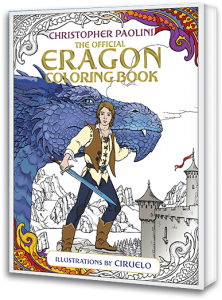 I’ve been giddy for this book ever since its announcement last year, and that excitement showed as I took less than two minutes quickly flipping through the book after the package arrived. I slowed myself down for a second flip-through, taking the time needed to truly appreciate the hard work that went into its creation, reading every excerpt and examining all forty-seven illustrations’ many details.

It’s clear that the book’s illustrator, Ciruelo Cabral, truly “gets” the world of Alagaësia and its inhabitants. Working alongside Christopher, the artist was able to meld his interpretation with how Christopher views the world and because of it, the characters I’ve pictured so vividly in my mind for more than a decade appeared on the page almost exactly as I had imagined them.

Ciruelo is famous for his portrayal of dragons and it’s no surprise why. The book gives us numerous glimpses at the series’ five main dragons and they’re breathtaking in every instance. In my opinion, some of the best illustrations in the books are ones featuring dragons. I was happy to see many of my favorite characters and scenes, and surprised by a few unexpected, but not unwanted, inclusions, such as “The Dragon Wing Runs the Boar’s Eye,” “The Grass Ship,” “Arya and Eragon Encounter Spirits,” and “Brom’s Tomb.”

I found that the excerpts featured alongside each illustration added further depth and understanding to what we were seeing. In some cases, I had forgotten the exact words of the scene, such as Murtagh and Nasuada’s exchange in “Murtagh Heals Nasuada,” and seeing it alongside such a beautiful moment brought to life gave me chills.


The only “gripes” I have (and I use the term very loosely) are the two pieces I wish had been included: aerial views of Tronjheim (although we did see this in Eragon’s Guide to Alagaësia) and of one of the series’ epic and chaotic battles. It also would have been interesting to see the spirits exiting Durza’s body when he was stabbed in “Eragon Vanquishes the Shade Durza” and perhaps Saphira flying above the ship in “The Talíta.” All things considered, these are minor “nitpicks” of an otherwise flawless collection of illustrations.

The book is absolutely worth its $11.35 price tag for the illustrations alone. Even if you aren’t into coloring and never plan to do so, having these pieces of art that vividly bring our favorite characters, scenes, and locations to life is worth every penny!

It wouldn’t be a book launch day without a giveaway! We raffled off two autographed copies and the lucky winners are displayed below!

Changes coming to the Inheritance Cycle Fitbit community starting in May

These incredible fan-colored Eragon Coloring Book covers blew us away – and won!

These incredible fan-colored Eragon Coloring Book covers blew us away - and won!

Better than the movie: Patrick Doyle's Eragon soundtrack is epic!