Home
/
Inheritance Cycle
/
Book 5
/
Why Eragon and Arya didn’t end up together, and why there’s still hope for their relationship, according to Christopher

One of the most controversial parts of the Inheritance Cycle was the seemingly-unresolved relationship between Eragon and Arya. The will they/won’t they relationship was core to many of Eragon’s decisions and motivators, starting with his first dream of the imprisoned woman in Eragon and ending with their heart-wrenching parting of the ways in Inheritance.

Naturally, many Eragon/Arya “shippers” were devastated that the pair didn’t end up together. Questions began to fly: why would Arya choose to remain behind as queen of the elves? Why didn’t Eragon fight harder to win her over? Why didn’t it happen?!

Never one to shy away from fan questions, Christopher Paolini has shared a wealth of new information while addressing his intentions with the ending, other possible outcomes, and the duo’s future. It’s important for us all to remember that there will be future books set within Alagaësia taking place after the events in the Inheritance Cycle, including Book 5, which will feature our favorite characters and, presumably, continue to develop their relationships: 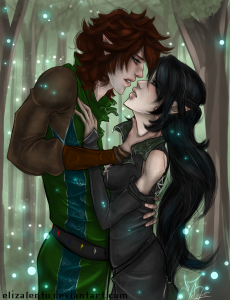 “The thing to keep in mind is that though the series is over, Eragon and Arya’s story will continue. They’re going to live for a very long time, and their relationship is far from over.”

“I have a number of other stories set within Alagaësia that I hope to write. Some of them feature main characters from the Inheritance cycle, others do not. However, I don’t think it’s giving away too much to say that we will see Eragon and Arya again at some point.” [source]

Okay, so we’ll see their potential relationship in future books… but why did Christopher decide to end Inheritance the way he did? As the universe’s creator, he didn’t feel it was a natural fit as he wove the final story together. Had he followed his initial path, the pair would have ended up together, but the consequences may have been dire; Arya could have abandoned her principals and joined Eragon for the wrong reasons: 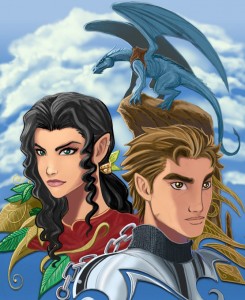 “I realized that the characters weren’t the people I thought they were back when I was fifteen, and that if I forced Eragon and Arya together (and it would be forcing them) I would end up breaking Arya’s character. … The [deleted] scenes between them, scenes where they were rather openly flirting, just did not work. Essentially, I was writing Arya the way that Eragon *wanted* her to be, not the way that she actually was. So, I cut back on the flirting. When I did that, I realized that it made no sense for Arya to suddenly turn on a dime at the end and leap into Eragon’s arms. If she did, it would seem as if she was only doing it for the sake of the dragons, not for Eragon, and Eragon himself would have noticed this.” [source]

One fan remarked that Eragon’s interest in Arya seemed to, at one point, be more about her beauty than her personality. Christopher confirmed that was accurate to a degree, but points out that Eragon came to love her beyond her appearance during the fairth scene in the later half of the series:

[That observation is] absolutely right, which is why Eragon and Arya don’t end up together at the conclusion of the series. Eragon still has some maturation ahead of him, and Arya has her duties as queen. That said, I think Eragon does learn to see Arya as a person and not just as a pretty face. That’s pretty much the point of the whole fairth storyline. [source] 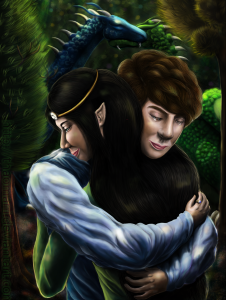 Altogether, the reasoning for their currently unresolved relationship is solid. Arya’s immediate obligation is to leading her people the death of her mother, Queen Islanzadí, and Eragon’s focus must be rebuilding the Riders. Time away from each other will enable them to grow and mature individually and, hopefully, recognize the power of their connection.

Christopher “No Comment” Paolini leaves us with a few parting gifts regarding their future being resolved, or at least addressed, in Book 5:

@Laurel_Deer: Will the tension concerning the possible romance between Eragon and Arya by the end of Inheritance ever be fully resolved?
Christopher: No comment. 🙂

@Baker2Justin: Did Eragon ever find love?
Christopher: You’ll have to read the next book to find out!

@LunePotter: Will there be Eragon/Arya moments in Book 5?
Christopher: I can’t spoil it, but I think you’ll enjoy Book V. 😀

It seems like we have our cake (good reasons for them not ending up together in Inheritance) and get to eat it too (hope for their future in Book 5)! Eragon likely won’t be single forever!

Were you happy with Eragon and Arya’s ending in Inheritance? Do you understand Christopher’s reasoning? What do you think is in store for the pair in Book 5? Let us know in the comments!