Catch up on Christopher’s answers from his recent Reddit “Ask Me Anything,” part three!

In the third part of our five-part Reddit AMA recap, Christopher reveals plans for a future Alagaësia story following Angela, deleted Eragon/Arya romance scenes, his ideal involvement in an Eragon movie reboot, when he wants to tackle Book V, and much more! 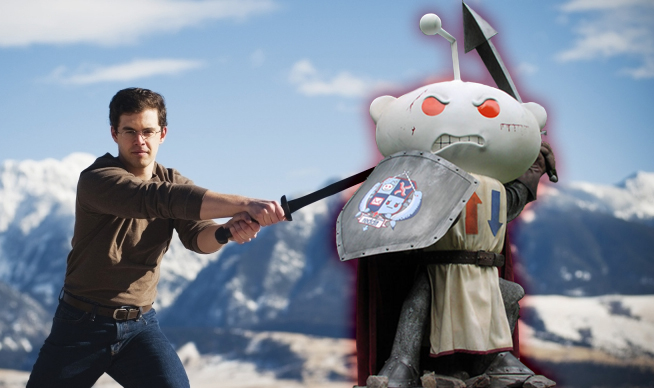 Earlier this week, Christopher took to the popular internet community Reddit to host an AMA, or “Ask Me Anything,” allowing readers of the r/Fantasy sub-Reddit to submit questions for the author to answer!

On Friday, we released part one of our AMA recap, which contained new details on the original ending of Inheritance, Book V hints, a surprise appearance from author Brandon Sanderson, and much more! Part two arrived yesterday, bringing original plans for the end of Inheritance, the gender of his upcoming scifi novel’s main character, his favorite video games, heaps of writing advice, and much more

The original AMA thread is still available, but we’ve compiled a list of questions and answers for easy browsing!

u/bleak-outlook asked: “Can you pleaaaase hint when you will begin Book 5? Just a ballpark?”

u/Rangerthe****up asked: “Do you wish you could change anything regarding [Eragon]’s love interest? It’s been a while but all I could remember was that he was infatuated with her solely because of her beauty. Which is… well, not the best foundation for love.

Christopher answered: You’re absolutely right, which is why Eragon and Arya don’t end up together at the conclusion of the series. Eragon still has some maturation ahead of him, and Arya has her duties as queen. That said, I think Eragon does learn to see Arya as a person and not just as a pretty face. That’s pretty much the point of the whole fairth storyline.

u/ mistrali asked: “1. What does Saphira get out of her bond with Eragon?
2. To me, Eragon seemed to swing back and forth a good bit on issues of vegetarianism/veganism, and it’s been pointed out that this seems to create inconsistency in his character later on, when he kills an awful lot of people and begins to eat meat again. What is your response to such criticisms?
3. Why do elves wear leather if they don’t eat meat?
4. What is/are Carvahall’s main religion/s, and what gods, if any, did Eragon himself grow up believing in?
5. How is it that you reconcile Eragon’s killing of the soldier and his actions with Sloan in Brisingr with (as you have stated and as per the final conflict) your idea of him as an ethical, moral and upstanding person?
6. What, exactly, did Galbatorix do that was so awful as to cause the Varden to employ guerrilla tactics and later wage war on him?
7. What would you say has been one of the advantages (for you personally) of being homeschooled? Any disadvantages, in retrospect, or are you satisfied with the way things turned out for you with homeschooling v traditional schooling?
8. What’s one of your favourite ads (TV commercials) and why?”

u/Deathbringer025 asked: “We all know that you can store energy on gemstones, even when the gemstones are not the best of the best they can still store certain degrees of energy, so I was wondering if it is possible to implant gemstones inside your body, like sing a spell to set a gemstone inside your arms or legs and use it to store energy inside your body, so even if enemies remove your garments and such, you could still have some magic stored and maybe attach some basic protections to those gems so you can be protected even if you are unconscious.”

u/Krysta-Khaos asked: “Would you ever consider writing a story, or even better a series, set in the past of Alagaesia? Something revolving around Galbatorix and his rise to power and/the height of the Dragon riders age? Far in the future of course, after you’ve finished your current science fiction book of course, but can we hope to dream?”

u/AedanStern asked: “What do you think is the greatest thing that Eragon has learned on his journey? What is your favourite quote from the entire cycle?”

u/Rangerthe****up asked: “[Following up on your thoughts about the original Eragon movie…], was there no way to retain some control over the direction the film would take? Or was that simply not on the table?”

u/SillySturridge asked: “Looking back on your Eragon books (Which I loved by the way) what mistakes, if any, do you think you made?”

u/Marcellogump asked: “Can we have a jealous Arya please???”

u/Creepy_Disco_Spider asked: “What did the deleted flirting scenes Eragon and Arya in the last book involve?”

u/Hairomax asked: “Will we ever get to read from Arya ‘ point of view?”

u/Hairomax asked: “Please don’t tell me Eragon is never going to be a father!”

u/caremal5 asked: “Christopher, when will we finally learn the seven words Brom said to Dragon?”

u/Norseburrito asked: “If a[n Eragon movie] reboot happened would you want to play a larger part in the telling of the story?”

u/appaloosa706 asked: “I was just curious what you thought about the Eragon movie? Also, have you ever considered writing a series about one of the characters from the inheritance series? If so which one?”

u/brainstrain91 asked: “How has writing sci-fi been, compared to fantasy? Do you think you’ll stick with it when this book is finished?”

u/driggs333 asked: “Is your new novel going to be more YA ish a-la Eragon, or will it stray into more “mature” territory like the last couple books did?”

u/here_for_the_lols asked: “What’s your new Sci fi novel about? How massive is ‘massive’?”

u/Aeduh asked: “I remember fondly the conversation I had with you in that bar in Poblenou BCN 4 months ago. I’m still thankful for that awesome time you gave and I hope you passed it well too. I left very intrigued about your FTL travel theory for your next book; you were secretive about it. When will we know something about it? It could be revolutionary, not just for your work but in general also.”

u/MarlborosandCoke asked: “What music would you say would best narrate the Inheritance Cycle? I always have music playing while I’m reading, so I’m curious to try it with something you recommend.”

u/Questhook asked: “What is your favorite portrayal of dragons in contemporary media?”

u/v-tanabata asked: “1. What’s your favorite snack to eat while writing/brainstorming/reading? 2. What do you do for fun, besides reading and writing? 3. How do you personally deal with writers block?”

u/GamesWithArty asked: “1. How did you fight the procrastination monster and motivate yourself to finish your book? 2. How do you feel about your homeschooling experience? Did you enjoy it? Do you feel that you’ve missed out on something?”

u/Telanstus asked: “How has your day been? What is your favorite food?”

u/Faedoria asked: “Whats it like after someone accepts your manuscript and agrees to publish it? Like what goes into that?”

u/oginome asked: “Is there book that has affected you in any way similar to the way Inheritance has affected so many of us?”

u/Morvick asked: “Which aspect of writing do you enjoy the most? (World-building, scenes or relationship development, imagining the anatomy of a dragon? Etc) I’m hopeful to look for your sci-fi novel on shelves soon. Do you find you’re inspired by current mythos or contemporary scientists?”

u/rocklio asked: “I notice that your books are quite hefty. How did you tackle such long Second Acts?”

u/Lokio asked: “I have always wanted to write and specifically fantasy but i always struggle at thinking about names and creating an interconnected and logic world, is there any advice you could give me?”

u/SnowGN asked: “I’m curious how you went about creating your variation of Old Norse that you used to create the Inheritance Cycle’s Ancient Language. What resources did you use and how did you keep track of your progress? Did you maintain a separate word file to keep track of your own rules, the phonetics, the system behind your language? How did you know when to depart from the limitations of this old language and create your own unique twists on it?”

u/MP_ROB_31B asked: “Who did you ask to proof read/ assist with the original edit of Eragon? I’m nearing the end of my own story and want to start making corrections.”

u/Cyronix1000 asked: “As a young writer, I’ve written many short stories, poetry, and even tried my hand at two or three books. However, my main problem is how to keep going with a full-fledged book. Sometimes I will get an inspiration large enough to start a book, and then I’ll get going on a great roll, but it never lasts long enough to finish even half the book before I lose inspiration and motivation. Did/do you have this problem, and could you give me any tips on how to keep moving with an idea?”

u/YannicWolff asked: “Why did you start writing novels/books? Is there any reason why you did?”

u/maelstrom197 asked: “One of the biggest problems I’ve found with my writing is that my plots are incredibly linear and boring – basically, if someone gave me the plot summary to a book and it was as simple as mine, I wouldn’t read it. So I guess my question is: where does your inspiration for your plots come from? Any writing exercises I could do to try and improve the depth and strength of my plots?”

u/SlugDiaper asked: “Have you tried braiding your beard, yet?”

u/gunslingers asked: “Is a hot dog a sandwich? If yes, is a taco a sandwich?”

Catch up on Christopher’s answers from his recent Reddit “Ask Me Anything,” part two!