Murtagh has always been a fan favorite among the pool of Inheritance Cycle characters, and as such has spawned a wealth of incredible fan art over the years.  We’ve had the opportunity to discuss many of these pieces of art, dissecting the traits and struggle of Eragon’s half brother due to the vacillation of his character’s journey in our beloved series.

At times good, bad and somewhere in between, many fans stayed loyal to Murtagh over the course of the series, while turning on other residents of Alagaësia.  In fact, even at the conclusion of the Cycle, Murtagh was unsure of his relationship with the newly freed peoples of Alagaësia and decided to join Thorn on a soul searching journey, headed north toward the uncharted lands of Alagaësia.

We know that Christopher will continue to spin tales set in the world of Alagaësia in Book 5 and beyond.  We also know through multiple teasers from the author that these stories will at some point include Murtagh and most likely Thorn (unless it’s an Eragon prequel).  From our Book 5 page:

Will there ever be a book about or featuring Murtagh?
Christopher: Let’s just say we haven’t seen the last of Murtagh. 😉

Do we get more of Roran and Murtagh in Book 5?
Christopher: Heh. I’ll take it under consideration.

Think, for a moment, about what kind of character Murtagh will return as.  It’s probable that his sojourn to discover himself will have him siding over with the allies of the freed Alagaësia once and for all to battle an unseen enemy.  Murtagh has a lot to repent for, and it’s clear that he would like to put the past behind him and better himself as a person. Christopher is noncommital on what the future holds, although his hint does seem to indicate that Murtagh will one day better himself and seek forgiveness from those he hurt:

Do you think that Murtagh would think of going to help Eragon with the new Riders?
Christopher: I’m sure he would, but I’m equally sure he wouldn’t do it anytime soon after the end of Inheritance.

But, what if Murtagh’s frustration is something that can never be fully repaired?  What if he can never forgive himself or those who had forsaken him as a young man? What if darkness and despair consumes him? We know another evil brews within Alagaësia, and a vulnerable Murtagh could fall prey to that evil’s manipulation.

With his future uncertain, we can at least take solace in knowing that we’ll finally have closure on Murtagh and Nasuada’s budding relationship from Inheritance:

Will we ever know Murtagh and Nasuada’s future?
Christopher: Yes.

Below is a depiction of Murtagh and Thorn by Hotaru Yagami.  This piece of fan art displays the crimson pair wreathed in flames against a bloody sky.  It shows Rider and dragon in a fearful fashion: 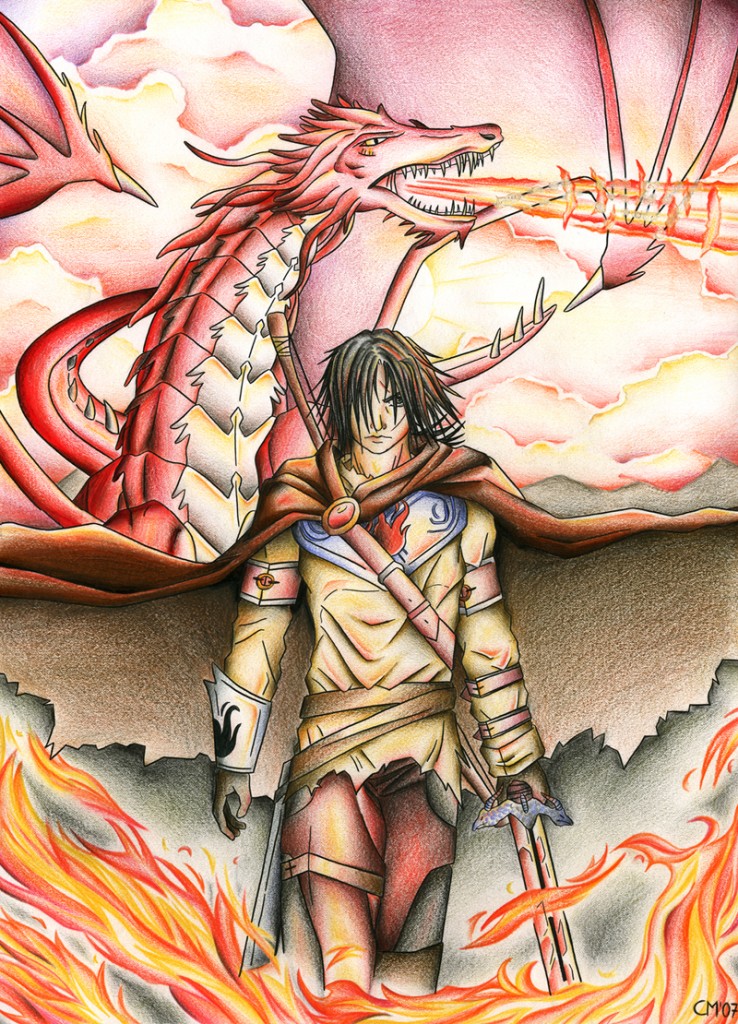 You can see a beautiful dark piece of fan art of Murtagh and Thorn we previously posted accompanied with a story. It offers a look at the two brooding characters as they seek to understand themselves and their future among the residents of Alagësia.

Now we ask: What if Murtagh and Thorn return to their darker ways, even after their journey in freedom?  Is there any remote chance that Murtagh will not be able to forgive and forget?  What path do you think they take in Book 5 and after? Give us your thoughts in the comments and social media!