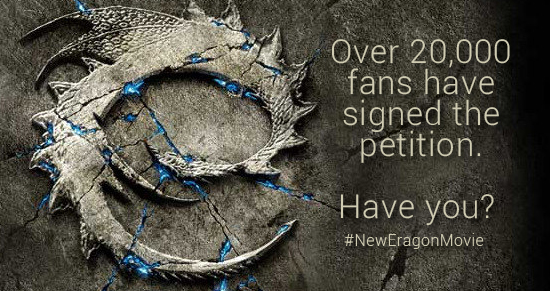 It’s been nearly nine years since the release of Eragon on the big screen, leaving fans less than satisfied. Fox has been radio silent on the future of the franchise since.

Last Thursday, we released an article exploring when we will possibly see the Inheritance Cycle rebooted. We also released a petition imploring Fox, the film rights holder, to reboot the franchise.

The response was overwhelming – well beyond anything we expected. Over 4,000 fans signed the petition in its first day, with the count now totaling over 20,000. In under 24 hours, we saw:

Since then, those numbers have increased even further and our campaign is only just getting started.

Later this week, we’ll be exploring how Fox should go about making a reboot in a new article. We also have several additional articles planned, including:

Most importantly, we need as many fans as possible to show their support for a full reboot of the franchise by signing our petition. If you haven’t already, please consider adding your signature. If you have friends who are fellow readers, ask them to join in too!

Let’s show Fox that we are passionate about the series and fully stand behind a proper reboot!

Okay, you’ve earned it! The secret password is Tinkledeath

To enter into the giveaway, go to our secret, passworded giveaway page! Enter the Tinkledeath to be granted passage. Be armed with all ten reward words, as you’ll need those to qualify for the giveaway!