Home
/
Inheritance Cycle
/
Hide The Shaving Cream: November is the time for The Bearded Men of Alagaësia

It’s November, that time of year where temperatures plummet and the dark of night shrouds us well before supper hits the table each evening. Some might start to encounter biting winds and even snow as, yes we’ll say it: winter is coming. It’s also a perfect time to wear nature’s ultimate defense against the elements: facial hair!

Last week, we posted a fan art profile saluting the heroines of the Inheritance Cycle which was inspired in part by October being the official month promoting breast cancer awareness. In turn, we’d like to follow up with a post inspired by men’s health awareness month (November), which is commonly recognized through events such as Movember/No-Shave November where men grow out their facial hair as a symbol uniting events such as charities and education on health risks.

Today, we’re going to have a bit of fun and put a Inheritance Cycle spin on this “mo”vement, highlighting some of the greatest facial hair aficionados of Alagaësia. 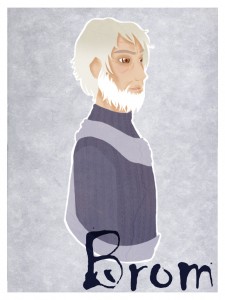 Brom – Father of Eragon and legendary Dragon Rider, it is only fitting that a man of his distinction have an equally earned beard.  From a small description of Brom in Eragon:

“He wore a brown hooded robe like a friar.  A pouch hung from the scuffed leather belt clasped around his waist.  Above his white beard, a proud eagle nose hooked over his mouth and dominated his face.”

Roran – the one they call Stronghammer, Roran did not start out with a beard in the Inheritance Cycle, but soon grew one as he became battle-hardened and an experienced leader.  Just look at out how Roran used his beard as facial armor in this snippet from Inheritance:

“A tendril of hot, foul-smelling smoke tickled his nostrils and stung his eyes, and with a start, he realized that his beard was on fire.” 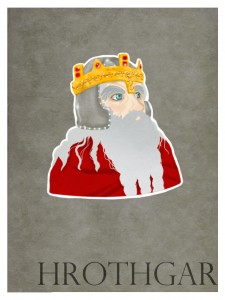 Hrothgar – once the proud king of the dwarves, King Hrothgar was born to wear a beard.  In fact, he might have had one of the longest beards in Alagaesia!  From Eragon:

“Beneath a craggy brow glinted deep-set eyes, flinty and piercing.  Over his powerful chest rippled a shirt of mail.  His white beard was tucked under his belt, and in his lap he held a mighty war hammer with the symbol of Orik’s clan embossed on its head.”

Martland Redbeard – This grizzled veteran of the Varden army has to be mentioned by virtue of his namesake or we’d be remiss.  Though some of his grand red beard had started to turn grey during the war and he was maimed in battle, Martland could keep his dignity whenever his name was whispered among the ranks.  Even Saphira identified him by his facial hair, in Brisingr:

“She examined the trio again and saw that the red-long-beard-man had lost his right hand, then returned to excavating the clay from around her scales.” 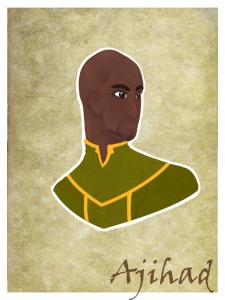 Ajihad – Father of Nasuada and the once great leader of the Varden who was tragically slain, Ajihad was a man of high principle and respect.  It is no surprise then that he kept his facial hair as well groomed as his army:

“The dome of his head was shaved bare, but a closely trimmed black beard covered his chin and upper lip.” 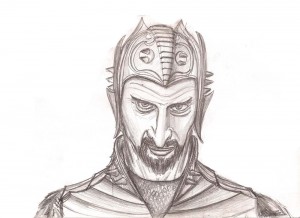 Galbatorix – An evil beard for an evil king! Galbatorix was surely able to increase his power level when he went for the dastardly goatee-style pointed beard.  Plus, one of the best parts about having a beard?  You can touch it while you utter menacing commands:

“The king stroked the fringe of his beard.  “I would like to know, once and for all, which of you is the better warrior.  You will fight as you are, without magic or Eldunarí, until one of you is unable to continue.”

Christopher Paolini – Finally, how could we not mention the man who created it all?  Author Christopher Paolini is currently working on a “book beard”, which he is letting grow out as he furiously scribes his next novel, a sci fi surprise.  It’s not the first time he’s summoned forth the power of the beard, and hopefully it won’t be the last!  We’ll just leave this here: 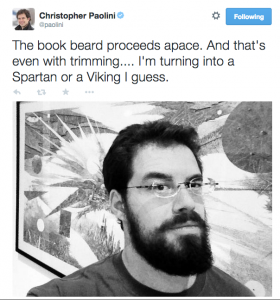 Now we ask: Who is your favorite bearded character(s) from our list?  Do you participate in any health awareness events for men and/or women? Who are some other bearded/moustachioed Inheritance characters that we didn’t mention?