We recently released a two part series, the “Top Ten Weapons in Alagaesia“, exploring the most powerful and moving weapons in the Inheritance Cycle. The posts spawned mass amounts of discussion. Is Brisingr really more powerful than Tinkledeath? Did Vrangr really bring about more change than Brisingr? What about Brom’s sword?

However, Christopher Paolini himself spawned the largest discussion as a result of the articles when he dropped a major bombshell, teasing that Vrangr/Islingr, the sword formerly belonging to Vrael before being taken and warped by Galbatorix, could have been the sword of the first Eragon. What?! We explore all of the evidence and what this could possibly mean for Book 5 and future Alagaesia books.

In response to our recent two part series exploring the “Top Ten Weapons of the Inheritance Cycle”, of which Vrangr/Islingr came in first place, Christopher Paolini sent Shur’tugal these cryptic, yet revealing tweets: 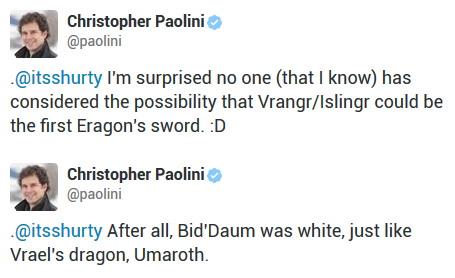 Vrangr has a long and storied history. The sword was first known as Islingr, or “Light Bringer” in the Ancient Language, and belonged to Vrael, leader of the Dragon Riders prior to the Fall. Vrangr was taken from Vrael’s corpse by Galbatorix after his defeat upon Edoc’sil (now Ristvak’baen) and renamed the sword Vangr, or “Awry”.

Vrangr was described as a Rider sword unlike anything Eragon had previously seen. “The blade, hilt, and crossguard were stark white, while the gem within the pommel was as clear as a mountain spring.” (Eragon, Inheritance)

This quote alone, from the later half of Inheritance, is enough to raise questions and theories tying the sword to the first Eragon. If the sword was unlike anything Eragon had encountered, it would explain its ancient appearance and unique style. While Vrael became the leader of the Riders after years of training and service, it was likely unknown when he first had his sword forged that he would one day become the Riders’ leader. It is unlikely that such a unique sword would have been forged or him.

Sadly, it seems as though even the “aura” of the weapon was tainted by Galbatorix’s decades of corruption and evil, as Eragon noted the sword’s haunting appearance:

There was something about the weapon that Eragon found unsettling. Its color— or rather its lack of color— reminded him of a sun- bleached bone. It was the color of death, not life, and it seemed far more dangerous than any shade of black, be it ever so dark.

A Brief History of Eragon I, Bid’Duam, and the Dragon War 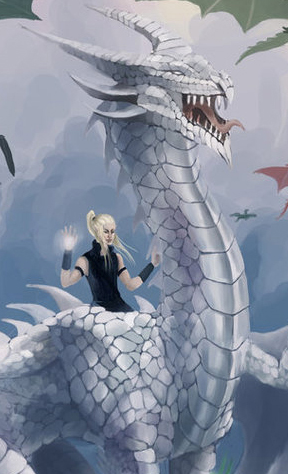 This is where things get interesting. The first Eragon was an elf and would one day would become the first Dragon Rider. During Du Fyrn Skulblaka, The Dragon War, Eragon happened upon a dragon’s egg (much as Eragon discovered Saphira’s egg). Once the white dragon (important!) hatched, Eragon I raised and grew close to the dragon, named Bid’Duam. Once the Bid’duam grew enough to travel with Eragon I, the pair set out to create peace and end the war between the dragons and elves before both races drove each other to extinction.

The pair were able to help the two races reconcile and the Dragon Riders were formed to maintain peace and order between the two races.

As the first leader of the Riders, Eragon I would have been the first to have a true Rider’s sword forged for him. Christopher’s cryptic tweets seem to indicate that Eragon I’s sword was forged white, as Bid’Duam was a white dragon. This would explain the tradition for a Rider to have a sword colored to represent that of his or her’s dragon.

The first Eragon and his dragon’s fate remain unknown. However, it is likely the pair died of old age or left Alagaesia. In the case of the former, it isn’t too much of a stretch to assume that Eragon I’s sword would be passed down, or at the very least, kept as a sacred item at the Riders’ home on Vroengard Isle.

The Importance of a Name – Islingr, “Light Bringer”

Another important focus: Vrael’s sword’s name, Islingr, or “Light Bringer“. Although we know from the series that Vrael was a noble leader of the Riders, it is unclear as to why his sword would be named Light Bringer. Was there darkness at the time of he became a Rider?

Instead, if Eragon I was to have a sword forged and named, it would make sense for the sword to be named Light Bringer. During Alagaesia’s darkest time – a time where the continent’s oldest and most powerful races a war that drove both to near extinction – Eragon I and Bid’Duam brought light to the darkness, ending a war and ushering in a bright and prosperous future for Alagaesia.

It is very important to note that we do not know where Vrangr went after Galbatorix’s defeat. Like the Belt of Beloth the Wise, the disappearance of this weapon is suspicious and very likely to be tied to Christopher’s future plans. We know that there will be a Book 5, meaning more trouble is brewing in Alagaesia. If so, this weapon – a powerful artifact, especially if it once belonged to Eragon I – could play a prominent role in future stories.

If this theory proves to be true, as Christopher seems to imply, it would mark the first true tie the first Eragon has to the Inheritance Cycle itself. Although he never made an appearance, we know that a Rider’s sword is an extension of his or her being, and it is entirely possible that it could play a larger role in future books.

While nothing is definitive, Christopher’s tweets combined with our analysis, the sword’s name and color, and its previous ownership, all seem to indicate that the weapon did in fact belong to Eragon I. Here is a summary of some of the facts and key questions from above:

This could be one of our biggest clues as to what could happen in future books, including Book 5. We would love to hear your thoughts, theories, and answers to some of the questions we posed in our final wrap-up! Leave your ideas and theories in the comments below.