Home
/
Fans
/
Fan Art
/
In Palancar Valley, home is where the heart is

In a small town such as Carvahall, one’s lot in life can quite often be determined by the family they are born into. Albriech and Baldor were sons of Horst the blacksmith, Katrina the daughter of the butcher Sloan, and Roran (and, to some extent, Eragon) was raised as the son of a farmer. These trades would typically prove vital in ensuring that each respective family had work and the means to provide an adequate way of life.

All of that changed with the razing of Carvahall by the Ra’zac in Eldest.  Within a short number of days, the village’s citizens lost family members, homes and wares crucial to their livelihoods.  The people of Carvahall were forced to flee their tiny hometown, or risk a dark future at the hands of the Empire and its dangerous minions.  Some left behind their inheritance passed down through their ancestors, such as Horst’s sons helping him bury smithing tools, or Morn giving up his tavern where he served his brews.

With the upheaval of their rural, quiet way of life, many Carvahall refugees turned to their families for support and guidance through the war against Galbatorix.  While some were able to return to their former way of life within the circle of the Varden (such as Horst and Gedric the tanner), several main characters of the Inheritance Cycle faced some of the story’s biggest challenges while forming a new legacy in their name.  Eragon, Murtagh, Roran, Katrina and Nasuada were all faced with the adversity of losing parents and family members, while still managing to be integral players in the fight for freedom.

Inheritance author Christopher Paolini is no stranger to the value of a close knit family (easily evidenced by the Paolini family’s new collaborative website).  By giving the most important characters huge obstacles to overcome through their epic journeys, he allowed them to forge new futures, and discover their own “Inheritance”.

Here we have a fine piece of fan art entitled “Rulers of Palancar Valley”, from artist Eliza Lento of DeviantArt.  It is a comforting representation of what could happen when the gift of family comes full circle, reborn from the pain and destruction of war.  Roran and Katrina, both of whom lost parents in the events of Inheritance, now share their new life with daughter Ismira back home in Carvahall, where it all began. 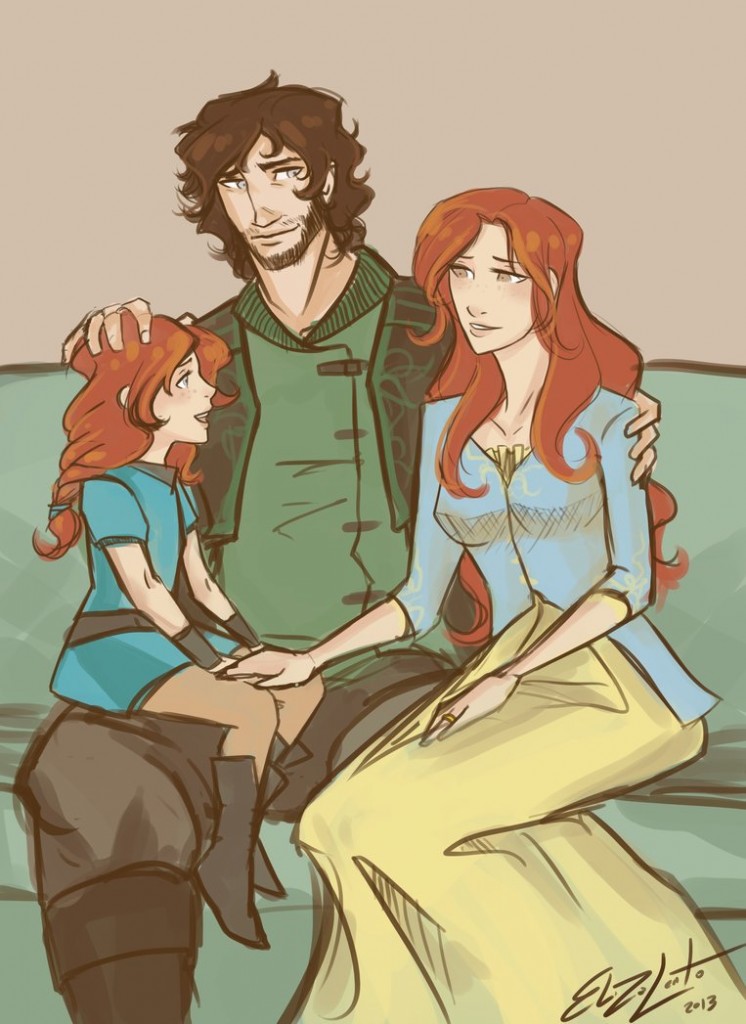 One thing is clear: Roran, now leader of Carvahall, is determined to rebuild his childhood home and village for a safe and welcoming place to begin his family with his wife and new child. Below is a selection from Inheritance, where Roran explains to Eragon his plans to revive Carvahall to protect its inhabitants:

“Once you rebuild the village, what then?”

A faint smile appeared on Roran’s face. “Something similar. With the tribute from the valley, I plan to build a castle atop that hill we always talked about. Not a big castle, mind you; just a bit of stonework with a wall, enough to hold off any Urgals who might decide to attack. It’ll probably take a few years, but then we’ll have a proper way to defend ourselves, unlike when the Ra’zac came with the soldiers. He cast a sideways glance at Eragon. “We’d have room for a dragon as well.”

Now we ask: What do you think was a key factor in the citizens of Carvahall recovering from leaving their home?  Will Palancar Valley return to how it once was?  Do you see Carvahall changing as it is reclaimed and rebuilt?  How about Roran and his family – will he return to farming or live another way?