Home
/
Inheritance Cycle
/
Question: Where in the world is Angela the Herbalist? And what the heck is she?! 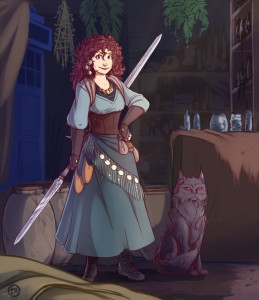 If there’s one topic that fans of Inheritance love to discuss, it’s the simple question of “What happens next?”.  Tune in to any given conversation regarding the conclusion of Christopher Paolini’s Inheritance Cycle and there is a good chance that the chatter will find its way towards the story’s most enigmatic character: Angela the herbalist.

Throughout the Cycle, Angela’s continuous stream of wit, knowledge and strength was mirrored by layers of mystery that kept fans guessing to the very end of Inheritance.  From our in depth Big Twenty series to past community discussion posts, fans and readers have left no stone unturned in their quest to discern the origins of Eragon’s most eccentric ally.

While we’ll have to wait a bit longer to find out any more details on Angela’s past, we can always look towards her future adventures. From “Blood Price”, one of the final chapters of Inheritance, Angela shares a hint with Eragon on where she might travel next:

“The time has come for Solembum and me to relocate to more friendly climes: the Beor Mountains, perhaps, or Du Weldenvarden.”

Eragon hesitated for a moment and then said, “Would you like to come with Saphira and me?”
Solembum opened one eye and studied him for a second before closing it again.

“That’s very kind of you,” said Angela, “but I think we will decline.  At least, for the time being.  Sitting around guarding the Eldunarỉ and training new Riders seems boring…although, raising a clutch of dragons is sure to prove exciting.  But no; for the time being, Solembum and I will stay in Alagaësia.  Besides, I want to keep an eye on Elva for the next few years, even if I can’t watch over her in person.”

“Haven’t you had your fill of interesting events?”

Now we’d like you to give the knucklebones a toss and read into Angela’s future, just as the herbalist did for Eragon so long ago at her cluttered little shop in Teirm. It would certainly seem as though Christopher will include the character in his confirmed Book V. For someone who is always ready to make an appearance for momentous occasions, the whereabouts of Angela certainly begs the question:

Where in the world is Angela the Herbalist? And just what the heck is she? We want to hear your theories, thoughts, and ideas in the comments!