While a story of growth, friendship, adventure, and hardships, the Inheritance Cycle is also, at its core, a story of war. Named the “Rider War” by Inheritance Cycle readers, dozens of skirmishes and battles filled the pages of all four books in the series. With so many battles between races, factions, and nations, one may find it difficult to remember the significance of each. 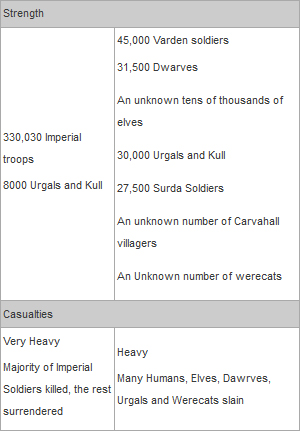 Fortunately, fans have banded together to create a comprehensive guide and timeline to the Rider War. One of the most interesting parts of the article: the realization that a name for the actual war is never mentioned in the Inheritance Cycle.

The timeline begins with a detailed look at the “Pre-War Violence” leading up to the Rider War, beginning with the “Fall of the Foresworn”, when the Varden hunted down and assassinated most of the dark Riders, to the “Skirmish outside Farthen Dûr”, leading Eragon and company through the Beor Mountains and eventually at the Varden’s door.

The timeline for the Rider War itself begins with the Battle under Farthen Dûr, a defining moment in Eragon and the catalyst for the entire second war against Galbatorix. The timeline, filled with details on location and actions during each battle, covers skirmishes ranging from the Siege of Carvahall and the Battle of the Burning Plains to the Battle of Gilead and ultimately, the Battle of Urû’baen.

The article doesn’t stop there, however; following the Battle of Urû’baen’s detailed account, fans have also compiled a detailed breakdown of the “Aftermath”, including the election of Nasuada as the new leader of Alagaesia and the departure of Eragon and Saphira.

While many of us have read the series multiple times, a descriptive timeline of conflicts in the series helps add perspective and scale to just how significant the Rider War was.