Vroengard Island has always been a place of legend amongst those who have lived in the shadows of the Fall of the Riders. Before Eragon, Saphira, and Glaedr traveled to the island in search of the Vault of Souls, few had visited in the one hundred years after the bloody battle and destruction of the Riders’ capital, Doru Araeba.

It took nearly four books for fans to get a glimpse of this once-majestic island, but when the time came in the Inheritance chapter “Amid the Ruins”, fans were not disappointed. Christopher beautifully described the ruins of Doru Araeba and the way the land had reclaimed the area in the years since the Fall.

DeviantArt artist Bethany Thomasson, also known as “Pilgrimwanders”, brought the moment of discovery to life in a piece of fan art: 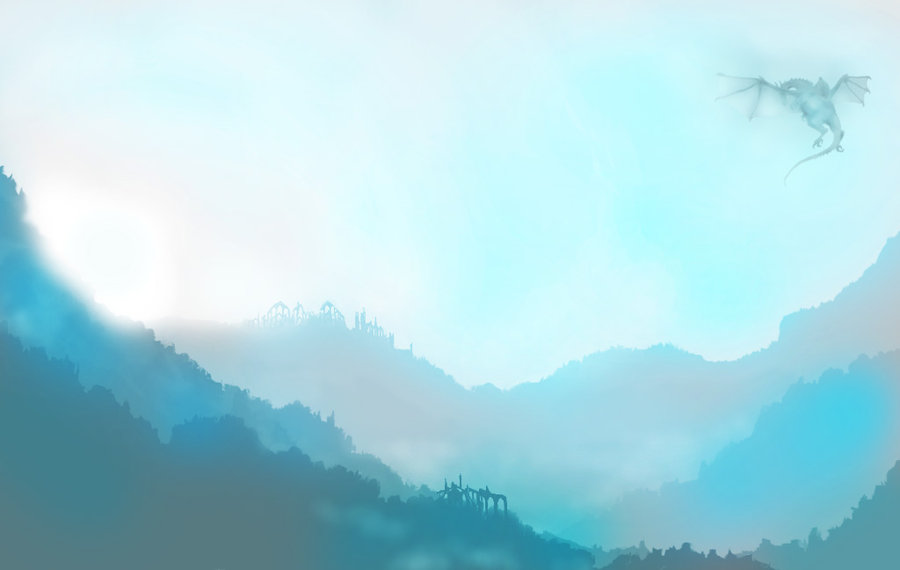 The scene, as illustrated above, from Inheritance:

Before them was a huge bowl-shaped valley, encircled by the steep mountains they had seen poking through the tops of the clouds. A dense forest of spruce, pine, and fir trees blanketed the sides of the mountains as well as the foothills below, like an army of prickly soldiers marching down from the peaks. The trees were tall and mournful, and even from a distance Eragon could see the beards of moss and lichen that hung from their heavy branches. Scraps of white mist clung to the sides of the mountains, and in several places throughout the valley, diffuse curtains of rains drifted from the ceiling of clouds.

A dozen or more rivers flowed out of the mountains and wandered across the verdant ground until they poured into a large, still lake near the center of the valley. Around the lake lay the remnants of the Riders’ city, Doru Araeba. The buildings were immense – great empty halls of such enormous proportions that many could have encompassed the whole of Carvahall. Every door was like the mouth to a vast, unexplored cavern. Every window was as tall and wide as a castle gate, and every wall was a sheer cliff.

– “Amid the Ruins”, Inheritance

Now we ask: Is this how you first imagined the land in your head while reading the scene in Inheritance? Despite the risk, would you want to visit Vroengard Island?