Werecats are a curious kind! Can you imagine being Eragon, a young and inexperienced farm boy thrust out into the world with little knowledge of the abnormal or mythical (other than the tales told by wandering traders)… laying on the ground with a werecat on your chest? 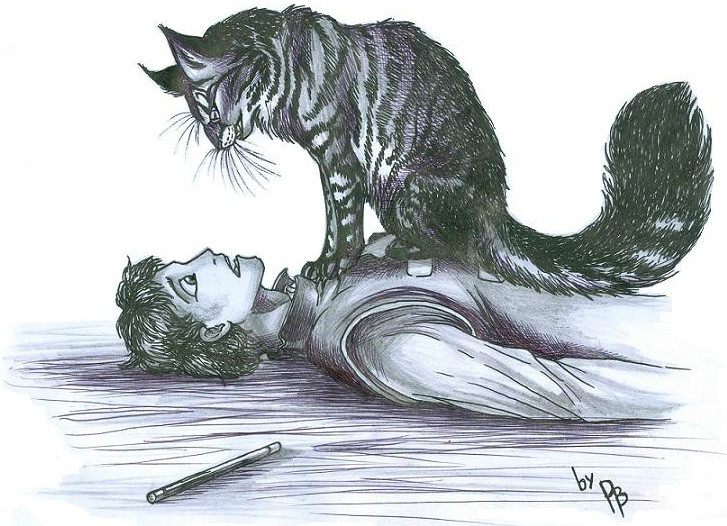 This scene, a fan favorite and one of the best scenes of Eragon, was brought to life by the DeviantArt artist Deygira-Blood. The illustration shows exactly how the initial confrontation played out, just moments before Eragon would be given a series of prophecies by Angela the Witch which would later prove a near spot-on narrative of the events of his life:

The cat yowled and stalked back to him. It jumped on his chest and crouched there, looking down at him with gleaming eyes. Eragon tried to sit up, but it growled, showing its fangs. Do I look like other cats?

Then what makes you think I am one? Eragon started to say something, but the creature dug its claws into his chest. Obviously your education has been neglected. I—to correct your mistake—am a werecat. There aren’t many of us left, but I think even a farm boy should have heard of us.

I didn’t know you were real, said Eragon, fascinated. A werecat!

Now we ask: Is this how you pictured Eragon and Solembum? (And bonus points to anyone who identifies the object next to Eragon’s head!)