Throughout the entirety of the Inheritance Cycle readers are reminded of the unique strength of the bond between Riders and their dragons, as shown on a daily basis between Eragon and Saphira. When the two are together, their bond allows them to function as one. When they are apart, this bond — or the lack of it — drives the pair into loneliness, boredom, and even depression.

The end of Inheritance reveals that another Rider and dragon bond has been formed… between Arya and her new green dragon Fírnen! Although we were not privy to a first hand account of Fírnen’s hatching and the moment in which Arya and Fírnen became bonded, one artist took a stab at illustrating the occasion: 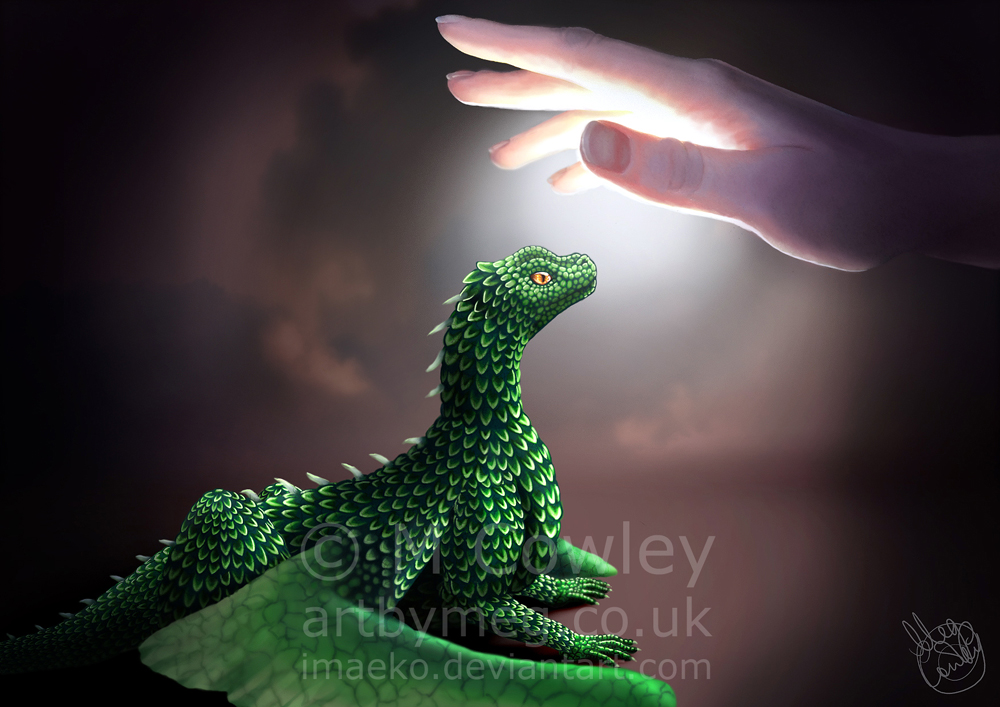 A similar scene played out in the early pages of Eragon, shortly after Saphira — then unnamed — hatched from her egg, much to the surprise of Eragon. Naturally curious, Eragon reaches out to touch the young dragon hatchling… and in that instant, initiates what would become the most important connection of his life:

Tentatively, he reached out with his right hand and touched its flank. A blast of icy energy surged into his hand and raced up his arm, burning in his veins like liquid fire. He fell back with a wild cry. An iron clang filled his ears, and he heard a soundless scream of rage. Every part of his body seared with pain. He struggled to move, but was unable to. After what seemed like hours, warmth seeped back into his limbs, leaving them tingling. Shivering uncontrollably, he pushed himself upright. His hand was numb, his fingers paralyzed. Alarmed, he watched as the middle of his palm shimmered and formed a diffused white oval. The skin itched and burned like a spider bite. His heart pounded frantically.

Eragon blinked, trying to understand what had occurred. Something brushed against his consciousness, like a finger trailing over his skin. He felt it again, but this time it solidified into a tendril of thought through which he could feel a growing curiosity. It was as if an invisible wall surrounding his thoughts had fallen away, and he was now free to reach out with his mind. He was afraid that without anything to hold him back, he would float out of his body and be unable to return, becoming a spirit of the ether. Scared, he pulled away from the contact. The new sense vanished as if he had closed his eyes.

Now we ask: Does the moment depicted above help illustrate the scene that was missing in Inheritance? Is this how you pictured it happening, or do you feel as though it happened differently?

*The artwork used in this post was done by the brilliant DeviantArt artist Imaeko!