by Mike Macauley
in Christopher Paolini
0 0
84

Loving to keep us in suspense, Christopher has tweeted yet another clue about his work-in-progress scifi short — which we reported on just a few days ago. At this point, all we know of the short story is that it will be a science fiction tale and will act as an introduction of sorts to Christopher’s first post-Inheritance novel (also scifi and unrelated to Alagaesia). Looking for the clue in question? Keep reading!

Christopher embedded an image in his tweet. The image depicts a very interesting black and white… thing? Check it out: 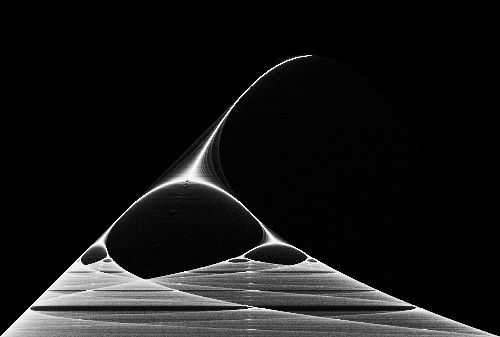 Christopher himself stated that he would be impressed if anyone could guess what this image represents… and impressed he was! One fan, @Julieanngrasso, was able to determine what the image is and found a Wikipedia entry explaining it — the “Mandelbrot set”. Wikipedia describes the Mandelbrot set as “a particular mathematical set of points whose boundary is a distinctive and easily recognisable two-dimensional fractal shape. The set is closely related to Julia sets (which include similarly complex shapes), and is named after the mathematician Benoît Mandelbrot, who studied and popularized it.” We’re still pretty lost.

Christopher has since confirmed that the fan’s link is in fact correct — the cryptic Twitter photo has been identified, but we’re no closer to figuring out what role it will play in the author’s upcoming scifi short.

Now that we know what this image represents, do you have any guesses as to what it could mean for Christopher’s scifi story or what more he may be hinting at with its revelation? Sound off in the comments!

Take a tour through Christopher Paolini’s home — inside the workplace of the writer!

Take a tour through Christopher Paolini's home -- inside the workplace of the writer!

Year long giveaway series launches this week with autographed Inheritance books and memorabilia, plus much more!