The Big Twenty is Shur’tugal’s twenty week long series of in depth discussion and theorizing, all centered around twenty core questions, loose ends, and theories in the Inheritance universe. The Big Twenty is the ultimate fan guide to happenings in Book 4 — and we hope you’ll join us for the adventure! To learn more about the Big Twenty, view our announcement article.

Eragon’s Guide to Alagaesia was first introduced to readers following the release of Brisingr. Christopher Paolini and Random House teamed up to offer fans a visual guide to the world of Alagaësia – one that captures the look, feel, and magic of the books in a way that the movie failed to do.

In addition to stunning artwork, Eragon’s Guide to Alagaësia offered fans a brief narrative from the series’ main character – Eragon – in the form of a book or guide written by our hero for future Riders. Christopher used the Guide as a tool to offer hints at the future of Alagaësia and our heroes… hints that we are able to use to understand the events which will transpire in Book 4 and beyond. After all, Christopher has stated that the Guide takes place after the events in Book 4.

There’s a lot to learn from Eragon’s Guide to Alagaesia, including the fate of our favorite (and not-so-favorite) characters, several prophecies, and more! We’ve compiled and explained each discovery for you to pick through and enjoy!

Christopher Paolini has stated that Eragon’s Guide to Alagaesia was written by Eragon following the events of Book 4. This allows us to confirm that several characters survived the ultimate war, as well as the confirmation of theories, prophecies, and more!

Whatever the war’s outcome, we now know that Eragon was alive and healthy enough to create “Eragon’s Guide to Alagaesia” – a book the Rider has described as “an introduction to the most important peoples, places, and things within Alagaesia.” In his introductory letter to the reader – a young Rider in Alagaesia – Eragon explains that both he and Saphira wish they were there to train the new Rider but “a matter of utmost importance has arisen, and we must leave at once.”

This guide and the letters’ narrative confirm that Eragon has walked away from the final battles – the as-of-yet-unrevealed events of Book 4 – able enough to continue adventuring, teaching, training and exploring, confirming that our hero survived the war. Eragon’s letters and information also imply that he has accepted a role as the Riders’ new leader. He appears to be taking this role seriously from the start, realizing the importance of training Riders even while absent. The Guide is intended as instructional reading for new Riders to learn from in his and Saphira’s absence.

While we know that Eragon survived, we do not know what condition the Rider is in. Paolini did a fantastic job showing readers that even the most powerful dragons and Riders can fall prey to life-crippling injuries, as we saw with Glaedr and Oromis. While we have yet to see the final battles in the war against Galbatorix transpire, it’s safe to assume that the most challenging and dangerous still lie ahead. It’s entirely possible that Eragon was able to escape these events unscathed; however it may be more practical to assume that our hero is a bit worse for wear than he was at the start.

While Saphira never addresses the reader directly in Eragon’s Guide to Alagaesia, she is mentioned by Eragon on several occasions. We know that she is alive – though what form or condition is unknown. Eragon does not state definitively that she walked away in good health nor does he mention any dire health conditions.

It’s safe to assume based on Eragon’s tone while discussing or mentioning Saphira that our favorite blue dragon is just fine. However, one should not ignore the possibility that “alive” may not mean “healthy and okay”. Saphira may have fared poorly during the war, now confined to her Eldunari. Saphira could have suffered a similar fate to Glaedr, doomed to be missing limbs, wings, or worse. We just don’t know.

While we’re left with more questions than answers, it’s refreshing to know that Saphira is still alive — in some form or another.

The Dragon Riders actually have a future

Prior to Eragon’s Guide to Alagaesia, we knew there was a little hope for the future of the dragons… and through their existence, the Riders’ own survival. We know that there are two hatched male dragons – Shruikan and Thorn – in addition to one female dragon – Saphira. We also know that the final egg (green) holds a male dragon. However, we’ve never known whether or not Saphira will take a mate and repopulate the dragons…

…until now. Eragon’s letters are written to a new “young Rider” chosen by a female dragon – which we know doesn’t exist at the time of Brisingr – who has been “swept away by strangers” to train as a new Rider. This single-handedly confirms hope for the future of the dragons, as we know that the only remaining egg (at least, only known egg) is a male’s. Because of this we can assume that Saphira and nother male dragon – likely Thorn or “Greenie” – have reproduced, creating the egg that hatched a female dragon for this unnamed Rider.

This also confirms that the dragon and Rider addressed in the book are not “Greenie” and the “Green Rider”, as “Greenie” is a male dragon.

How many other eggs have been discovered or created since the events in Book 4? Is this Rider the only new Rider? Is the new Rider male or female?

The Guide is clear: Eragon and Saphira are here to stay, setting up camp as de facto leaders of the dragons and Riders. However, Eragon does allude to a need for their absence, stating that he and Saphira are leaving “at once” to take care of matters elsewhere. The letters do not say where the pair have gone or how long they will be gone for, but it’s safe to assume that this is a means of satisfying the prophecy that the two will leave Alagaesia – though not forever.

However, one can also gather from this information that Saphira and Eragon have simply left to take care of matters in another part of Alagaesia. In the end, the only thing that remains clear is that Eragon and Saphira are not permanently leaving their home.

A new “baddie” plagues Alagaesia and its inhabitants

Eragon makes no attempt to hide Alagaesia’s new trouble from the young Rider, stating in his opening and closing letters:

Anyone would find the experience overwhelming, especially during such unsettled times, when an unnamed shadow stalks the land.

But, as I said before, these are unsettled times, and it is possible that you are not safe, not even within these walls.

If the unnamed shadow should attack while Saphira and I are gone, Glaedr will guide and protect the two of you. 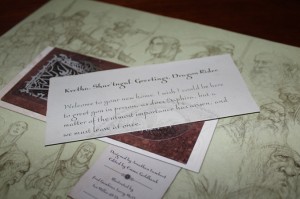 This is troubling information. Though the letters never confirm Galbatorix’s demise, it’s safe to say that a new generation of Riders and Eragon’s semi-relaxed attitude throughout the Guide imply that Galbatorix has been dealt with in one way or another – either by death or imprisonment.

However, the Guide does not paint a happy picture for Eragon and Alagaesia following Book 4’s events. Eragon mentions an “unnamed shadow” plaguing the lands, one that he fears enough to leave Glaedr’s Eldunari in the possession of a young Rider in order to ensure the Rider and dragon’s protection while he and Saphira are gone.

What this Guide doesn’t confirm

Final thoughts and our conclusion

Reading through this with the intention of picking the content apart to find core facts and hints has lead us to one key realization: Christopher revealed a lot of information in this brief Guide. However, we believe this was intentional. Christopher made no secret of the fact that the Guide hints at events following Book 4, and seemed to be entertained at the idea of its revelations. We believe that Christopher deliberately plotted the information revealed in this book in order to stir fans theories, ideas, and questions… and to possibly send us all in the wrong direction. Could the book be hiding more than we think? Have we read too far into its meaning? Not far enough?

Story-wise, the book offers us some closure on our favorite characters and fantasy world. We know that Eragon and Saphira will make it out okay. We know that their efforts have begun to aid in the rebuilding of a dying race – the dragons. We know that Eragon and Saphira have assumed a role they were destined to take on: leaders of a new generation. Their attitudes and optimism shine through in the notes and information found within the Guide and offer hope to fans that despite the troubles still plaguing Alagaesia, good will overcome evil.

Not all has been answered here. We have much more to learn in Book 4, including the battles, trials, and tribulations that lead to the events mentioned in the Guide. We have yet to learn of the fates of some series favorites as well as the more infamous characters. We should use the information discovered in this book to theorize and guess at these events.