Today was the second and final day of Christopher Paolini’s visit at Comic-Con 2011, and while it didn’t feature panels, the day was still an exciting one! The day was filled with random author appearances, Book 4 questions, sketches, signings, and more. Keep reading for a look at the day, including pictures from Christopher’s events! 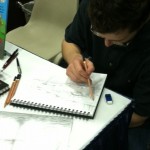 Christopher spent a large amount of time at the Random House booth continuing work on his sketches (set to be raffled off to fans attending the convention). Christopher’s first sketch – which we incorrectly stated to be a dragon flying – turned out to be a dragon sitting on a tree branch. The author also began work on a second sketch during his time at the booth.

Each of Christopher’s visits to the booth were met by large crowds of friendly and cheerful fans, all who were delighted to ask Christopher questions about Book 4 (with many “You’ll find out in November!”s) and have their books signed.

Christopher also held a solo signing following his massive group signing with the authors from “Epic in Epic Fantasy” panel yesterday. The signing, as was expected, was tremendously successful. Hundreds of fans queued for a shot at meeting their favorite author. Copies of Eragon, Eldest, Brisingr, and Eragon’s Guide to Alagaesia were signed in addition to beautiful free Inheritance posters being given out at the convention. We’ll have lots of these to give away in the coming weeks! 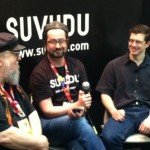 Christopher also participated in a Suvudu podcast at the Random House booth featuring George R. R. Martin. The podcast interview isn’t available yet but we’ll be sure to let you know as soon as it is! Christopher was clearly admired and appreciated the company of Martin, said to be one of the greatest living fantasy authors, and the podcast was incredibly enjoyable to listen to.

Christopher’s quick visit to this year’s convention went extraordinarily well. From the incredible “green dragon” t-shirts the Random House staff were sporting to the excitement in the air from fans mentioning that they had played and enjoyed Inheritance Quest already, it was evident that fans are truly excited for the final book.

While this may be Christopher’s final trip to Comic-Con promoting the Inheriance Cycle, but it’s evident that Christopher will be returning for many future visits as his career as an epic fantasy and science fiction author blossoms. We’re looking forward to that future!