Christopher Paolini has sent out his latest edition of the Alagaesia News, his periodic newsletter used to connect the author to his fans. It’s been a while since we last heard from Christopher, which means we were in for quite the long letter! Christopher used the opportunity to discuss a number of recent happenings, including the recently-launched sweepstakes to meet the author for dinner in Montana, the now-released Inheritance Almanac,Comic-Con, Patrick Rothfuss, progress on Book 4, and much more! Check out the full newsletter after the jump.

The full October 2010 newsletter is available below:

I have very exciting news… how would you like to win a trip to visit me, here, in Montana? The folks at Random House have put together a contest for all Inheritance Super Fans that will run through November, with the grand prize being a visit to my hometown in Montana, the place that inspired ERAGON! We’ll have lunch and chat at a local restaurant, and you’ll get to ask me your burning questions. It’s easy to enter. All you have to do is send my team at Random House a video explaining why the Inheritance cycle is one of your must reads! And you have a second chance to win, as the runner-up will win a party via Skype from yours truly. Click here to enter and read the official rules and regulations.

And I have even more great news . . .there’s a NEW book in the Inheritance universe: THE INHERITANCE ALMANAC: an A-to-Z Guide to the World of Eragon, on sale today!

Mike Macauley, in collaboration with Mike Vaz, has produced a comprehensive guide to all the creatures, places, and things in Eragon’s world. It’s an amazing compendium of information that will answer many of your questions and help you keep track of the arcana of Alagaësia. As many of you know, Mike is the webmaster of Shurtugal.com and has supported my work since Eragon was first published by Random House. For years he has provided breaking news updates for his readers, traveling to book launches, the Eragon movie premier, and Comic-Con to report the latest news on all-things Inheritance. I’m pleased, therefore, to recommend you visit Mike’s redesigned shurtugal.com website and check out THE INHERITANCE ALMANAC. It will make a great addition to your Inheritance collection.

And now for updates on writing and my recent travels.

Every novel presents opportunities for me to grow as a writer. And the fourth book in the cycle is no exception. I am finally–after more than a decade spent working on this series–getting to write a proper ending to the story. And it’s a challenge! But one I enjoy, and one that I’m learning a great deal from. Endings are just as important as beginnings (and middles, for that matter), and I want to do this one justice. It’s funny. Even though I’ve had three novels published, this is the first time I’ve had the chance to wrap up a story once-and-for-all. Finito…no more…the end.

Thank you all for your patience and support. I know you are looking forward to seeing what happens to your favorite characters.

In addition to writing, I’ve been doing some traveling over the past several months. In August, I attended the science-fiction/fantasy extravaganza that is San Diego Comic-Con.

I met Patrick Rothfuss, author of The Name of the Wind, which I highly recommend. It’s one of the best fantasy books I’ve read in a long time, and Patrick is a really nice guy in person. Here’s a link to an interview I did with him: http://sf-fantasy.suvudu.com/2010/07/cc-aftermath-christopher-paolini-interviews-patrick-rothfuss.html

Among the artists I met were a number whose work inspired parts of my writing, most notably Brom. Yes that Brom. I named the character after him ages ago, when I started the Inheritance cycle, but this past Comic-Con was the first time that we ever crossed paths in real life. It was quite an honor to be able to shake his hand and get some pictures with him. Awesome artist, great guy, and a real hero of mine. Here he is: 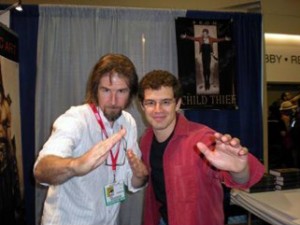 Directly after Comic-Con I flew to the Boy Scout Jamboree in Virginia. The event celebrated their 100th anniversary. It was held on an enormous military base, and tens of thousands of people attended. The boys were incredible and very enthusiastic. Many walked miles through the hot, muggy afternoon to get their books signed. Dozens of boys gave me badges, and one of the troops even made me an honorary member, which I thought was pretty cool.

In September it was my great honor to attend the 175th anniversary celebration of Bertelsmann, which was held in Berlin, Germany. Random House, my publisher, is a subsidiary of Bertelsmann. I attended along with three other Random House authors (John Stephens, Markus Zusak, and Lauren Kate)–to represent Random House at their international business meeting and gala. Wow! I had no idea what a grand event it was going to be. The business meeting was held in an enormous high-tech auditorium, while the gala was held in a multi-story concert room reminiscent of a Viennese ballroom, with carved and painted walls and ceilings and a huge wall screen at the front to project our images. The head of the European Union Commission was at the gala, as was the Chancellor of Germany, Angela Merkel. Talk about intimidating! Overall, it was an amazing experience that felt like something out of a movie, and I’m very glad I was able to participate.

But that’s not all!

This week I am visiting South Carolina to speak with thousands of high school and middle school students. I’ll be talking about life as an author and the craft of writing, and trying to inspire a new generation to become inveterate readers and writers. This will be my final trip until the manuscript for book four is finished. Once I return I’ll be focused on getting out the final chapters, so you can have the book in your hands as soon as possible.

I will be viewing the entries to the Super Fan contest, and look forward to seeing what you create.

May your swords stay sharp!

Be sure to check your local stores (and online too!) to pick up your copy of The Inheritance Almanac!